What We Did On Our Holidays (Part 1)

It has been a few weeks since my last posting. We've been away on a trip aound the South Island and since our return last week we've been caught up with dealing with the sudden and unexpected death of a family member. There's also been the usual re-acclimatising to everyday life that seems comes with any return from an extended time away.

While we were away on our trip I made notes with the intention of posting regular updates here on our progress, but it soon became apparent that there wouldn't be the opoportunity to visit an Internet cafe often enough to achieve this, and it's only now that I've gotten around to deciphering my handwritten scrawl. So here's the first instalment of a diary of our trip, in text and pictures.

We flew down from Auckland to Wellington on an early morning flight. It takes less time to fly between these two cities than it takes to get from our house to Auckland Airport. Each time I visit Wellington I'm struck by how much better the shopping in Wellington is than Auckland. There seems to be more variety, more range - and more secondhand bookshops too though an old favourite, Bellamys on Cuba St, is closing down.

In the evening we had drinks with a bunch of Wellington TSV readers whom I haven’t seen for simply ages. Rochelle and I stayed overnight in the Comfort Hotel on Cuba St. we had a pokey little hotel room just barely large enough to fit the bed, and windows overlooking the street, which was very noisy even at 2am and sounded like a revolution but was probably just drunken revellers being thrown out of bars. Are these people who have to get up and go to work the next morning...? 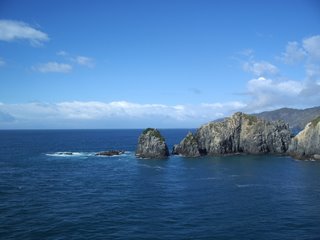 Photo: The northern-most tip of the South Island.

An early morning departure from Wellington on the Kaitaki, a large passenger ferry crossing the Cook Strait bound for Picton. We were fortunate not to miss the sailing as the ferry company brought the departure time forward by quarter of an hour and the taxi was late to pick us up. It was a very smooth crossing, to my considerable relief as I’m not good with boats - though Rochelle (who claims to have no problem with them), looked decidedly green for most of the trip! Upon our arrival in Picton the skies quickly darkened and as we made our way on foot to the railway station the rain started to fall. This turned into a storm, apparently causing the delayed arrival of our train. Fortunately by the time it arrived the storm had passed. 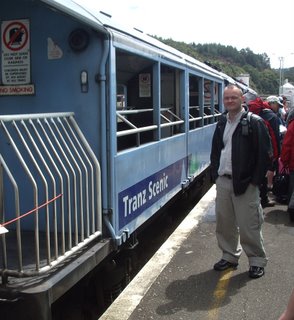 Photo: About to board the train in Picton.

The Trans Coastal train from Picton to Christchurch takes about six hours and passes through some dramatic scenery, travelling along the coast close to the waters edge for a long distance, with seals basking on rocks on one side of the train, and rugged hills and snow-capped mountains in the distance on the other. The Trans Coastal has an outdoor observation car, which was a terrific though rather chilly experience. We arrived in Christchurch in the early evening. The railway station is at Addington, which is a suburb of the city and not within easy walking distance of the city centre so we caught a shuttle. 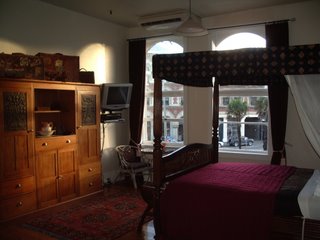 Photo: Our room in the Burberry Apartments.

We’d booked our accommodation online, picking a place called the Burberry Apartments for two nights, for no other reason than it was central and was free the two nights we required. We had little idea what to expect but it was simply delightful. The keys were waiting for us in a safe outside along with instructions. Our apartment was on the first floor, above a clothing store and was one of a number of rooms converted from a converted clothing design company’s premises. The apartment was self-contained with its own kitchen, all wooden polished floors and a lovely four poster bed. Ah, bliss!

I look forward to reading about the rest of your trip - sounds like you've had a great time!

My thoughts go out to Rochelle at this sad time, we look forward to catching up with both of you once she's feeling up to it. Give her a big hug from me!