Auckland is a very popular destination for tourists, but living here we don't usually feel all that inclined to try out the tourist attractions on our own back doorstep. We tend to behave like tourists only when we're away from our familaiar environs.

We might never have gone whale watching in Auckland if I hadn't been given tickets for Auckland's Dolphin and Whale Safari by my company at Christmas. With our seventh wedding anniversary happening this week (tomorrow in fact), we decided that this was a good time to mark the occasion and use the tickets which have been pinned under a magnet on the fridge for the past three months. So we went yesterday (which turned out to be a good move as today is a howling storm outside and would have made for a miserable trip if we'd picked Sunday rather than Saturday).

The safari was great fun. We spent about 5-6 hours travelling around the Hauraki Gulf on a 20 metre Powercat, which is a twin-hulled boat with plenty of observation points both enclosed and on the deck. There was a party of about 35 of us, mostly tourists from all corners of the globe, but a few locals like ourselves.

The crew were very entertaining and informed commentators, hugely passionate about marine ecology and the importance of looking after the environment and protecting whales and dolphins from slaughter by humans.

We travelled quite some distance to the outer reaches of the Hauraki Gulf, out as far as the Coromandel pennisula and the Barrier islands. For a long time it looked like we might not get to see any whales or dolphins. Apparently there are a few days when there are none to be found (when that happens the tourists get a discount voucher for a return trip).

After a few hours of looking (concentrations of birds flying close to the surface of the sea is the telltale sign), we came across what the crew referred to as a 'work-up', a phrase that made sense once we came close enough to see what was happening. A pod of perhaps as many as 250 'Common Dolphins' (Delphinus delphis) had herded pilchards into a tight ball and had driven them up to the surface where they were picking them off in a frenzy, and the sea birds, especially gannets. The dolphins were joined by three Bryde's Whales (Balaenoptera edeni) which rather unfairly in seemed, undid all the dolphins' hard work by diving up through the ball of fish and taking many of the pilchards for themselves. This is however apparently the way it normally happens - when you see a pod of dolphins feeding there's usually a whale or three around as well.

I tried to get some good photos, but the speed of the whales and dolphins was far greater than my own reactions or the speed of my digital camera, so I came away with lots of shots of ocean and only a few of these magnificient marine mammals.

A highly recommended day out, for visitors to Auckland and locals alike! 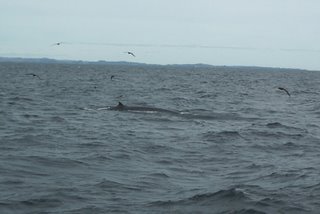 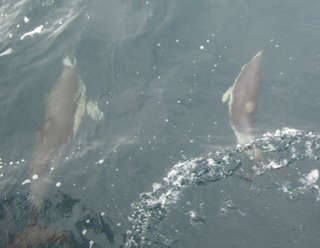 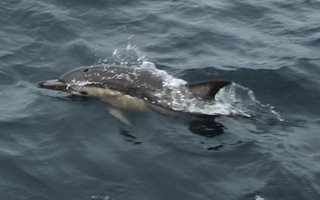