Doctor Who: The Collection - Season 19 blu-ray set was released in December 2018. I was commissioned to write the production information text for the season's penultimate story, Earthshock.
Eight minutes into the second episode of Earthshock, there’s a continuity error hidden in plain sight. It’s initially on screen for just four seconds and reappears in four even shorter shots over the next half-minute. Blink and you might miss it.

Another Tegan-related phrase, “I’m just a mouth on legs”, stumped me. According to various sources, including most recently the Doctor Who – The Complete History partwork, this phrase was included in the story after an American fan had used it to describe Tegan. This struck me as unlikely given that fandom had only recently seen Tegan on screen for the first time when Earthshock was written. I checked with a number of people who were likely to be in the know, including Janet Fielding herself, but no one knew the answer. The info text must be as accurate as possible so, as I was unable to verify this particular claim, you won’t find it in the subtitles. 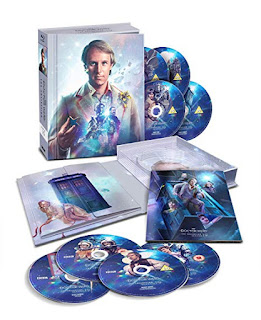 This article was first published in issue 498 of Celestial Toyroom, the fanzine of the Doctor Who Appreciation Society.
Posted by Paul Scoones at 4:06 pm No comments: