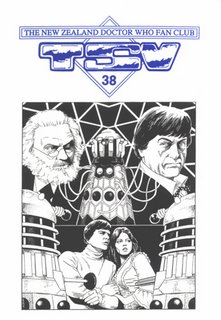 So after all that commentary, it seems I recall more about this issue than I thought! Click the link to read TSV 38.
Posted by Paul Scoones at 11:54 am No comments: 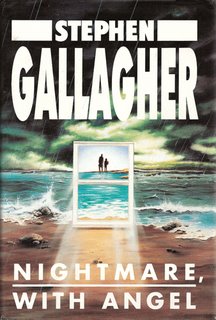 I collect books by British thriller writer Stephen Gallagher. He has an extraordinarily compelling prose style and his novels are simply gripping. I own a complete collection of his books and buy each new title soon after it comes out.

Stephen Gallagher was once an author whose works could commonly be found in bookstores, but like other horror/thriller authors, he has somwhat fallen out of fashion with mainstream book publishers over the last decade, apparently due to the declining popularity of this particular genre of novels. These days Gallagher's books are published in relatively small quantities as signed, limited edition hardbacks.

Several years ago I was sorting out my overladen bookshelves and discovered to my annoyance that I was missing one of the books from my Gallagher collection, a 1992 novel called Nightmare, With Angel. I used to own this book. I remember buying it in paperback in 1993, so I suspect that I either loaned it to someone and it was never returned, or it got misplaced during several changes of residence in the mid-1990s.

No matter, I thought; I'd just pick up a replacement copy the next time I saw it in a bookstore. Of course I could have purchased one from Amazon or Ebay, but I didn't want to go to this expense for something I should be able to find relatively easily and cheaply in person. Or so I thought.

I browse new and secondhand bookshops fairly frequently, so over the last four or five years I've been looking for this Stephen Gallagher book I must have made hundreds of visits to various bookshops, always glancing over the 'G' section of the fiction range, and checking out the horror/thriller titles, if the shop happened to have a separate section. But I simply couldn't find the book anywhere. I'm not just talking about Auckland either; in that time I've been into bookshops in Wellington, Christchurch, Brisbane, Sydney, London, Blackpool, even the world-famous bookshop town Hay-on-Wye. I've seen various other Gallagher novels on the shelves - Oktober, Follower, Valley of Lights, Rain and Down River all crop up with depressing frequency, but no Nightmare, With Angel.

There was a moment early this year when I thought my quest was at an end. I visited a secondhand bookshop in Kaikoura which had a copy of the book in paperback but - cruel fate - it was in such shockingly poor condition (the bottom half of the back cover and last few pages had been torn off) that I simply couldn't bring myself to buy it. So the hunt went on.

Finally, last weekend my luck changed. Rochelle persuaded me to get up early on Saturday morning to go with her to the Variety Club book sale, a massive collection of secondhand books held each year at the Alexandra Park raceway in Epsom. I trawled through the sale, picking up a few books that interested me and was just about to finish looking when I glanced below one of the tables to one of the overflow boxes and there it was - a copy of Nightmare, With Angel, and a first edition hardback, no less. Honestly, after years of searching, time stood still for me for a moment. I simply couldn't believe my eyes. The book was in excellent condition, and what's more, when I took it up to the counter it cost me a grand total of 50 cents which hardly seemed right after all the years I’d been looking for this elusive novel.

My Stephen Gallagher collection is complete once more and my next challenge will be to kick the long ingrained habit of looking under 'G' in bookshops!
Posted by Paul Scoones at 2:58 pm No comments: