A Year Without Doctor Who

The Sixth Doctor arrived in March 1984, thirty years ago this month.

Just a couple of weeks ago I got to discuss this milestone with both Colin Baker (the Sixth Doctor) and Nicola Bryant (his companion Peri) when I hosted a series of talks with them in Dunedin and Christchurch, at the Armageddon Expo events.

As I talked to these two actors about the anniversary of their first appearance in Doctor Who I couldn't help but think that the relevance was slightly lost on myself, and perhaps also on those members of the audience who were old enough to remember what it was like to be a fan thirty years ago in New Zealand.

1984, the year in which Peter Davison's third and last season aired and Colin Baker commenced playing the Doctor, was entirely devoid of any televised Doctor Who at all in this country. Not one of Colin Baker’s stories screened here until November 1988, several years later and indeed some time after Colin had departed the role.

The series had abruptly halted on TVNZ following ‘Mawdryn Undead’ in late November 1983. This was an unfortunate point at which to break the series as it left hanging the ongoing plot involving Turlough and the Black Guardian.

At first it appeared as though TVNZ were giving Doctor Who a brief respite over the summer months. I can remember being relaxed about this break at first, possibly even relieved. My family were in the habit of going away camping on a remote beach - without a television set - for two weeks in January. I’d have been most upset if the show had been on at the time.

I’m sure I would have been even more annoyed had I known that it would be a very long wait. That summer of 1983/84 came to an end without any sign of Doctor Who’s return. It became a weekly ritual to scan the New Zealand Listener’s television listings, eagerly searching out a billing for the next story, only to be deflated week after week, month after month. The series finally returned in April 1985, after a hiatus that lasted about 18 months. There was a bittersweet twist to this. The return was not the anticipated latter half of the Fifth Doctor’s era (which should have resumed with ‘Terminus’). Instead we were treated to older stories from the 1960s and 1970s. I was thrilled to get to see these vintage episodes, many which I’d never viewed and those I had seen were dim distant memories. It did mean however that it would be years before TVNZ got around to screening those much delayed new episodes.

The prolonged absence was made all the more agonising because for the first time ever I was well informed about what was screening in the UK. At the beginning of 1984 I discovered Doctor Who Magazine. My grandmother most generously set up a standing order with her local newsagent in East London, and started posting me a copy every month commencing with issue 84, which arrived in early January.

Doctor Who Magazine was a treasure-trove of previews, set reports, reviews, and photographs. I studied these issues in obsessive detail, scrutinising every word and picture, trying to imagine what thrilling-sounding stories such as  ‘Frontios’, ‘Planet of Fire’ and ‘The Caves of Androzani’ must be like. 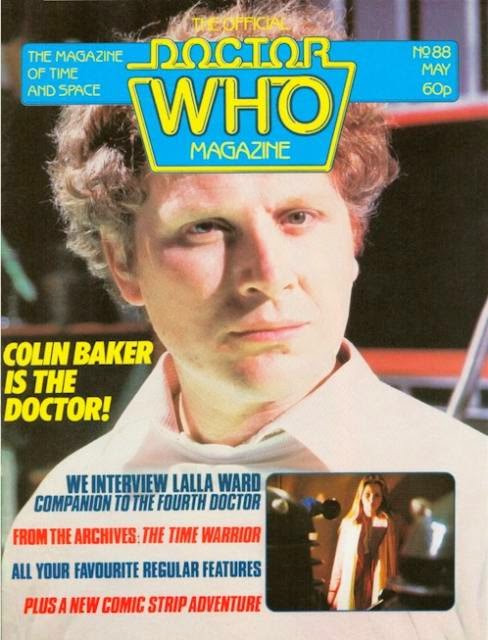 I witnessed through the pages of the magazine the departure of the familiar TARDIS crew of the Fifth Doctor, Tegan and (for me, the newly arrived) Turlough, to be replaced by the Sixth Doctor and Peri. My impression of these two characters, played by unfamiliar actors, was entirely based on what I saw and read in the magazine.

A large part of my understanding of what the Sixth Doctor was like came from reading the Doctor Who Magazine comic strip. Of course I knew from the photographs elsewhere in the issues that he had a tasteless and gaudily colourful costume but in the uniformly monochrome strip it actually looked quite stylish. The new Doctor seemed good-humoured with an easy-going personality. 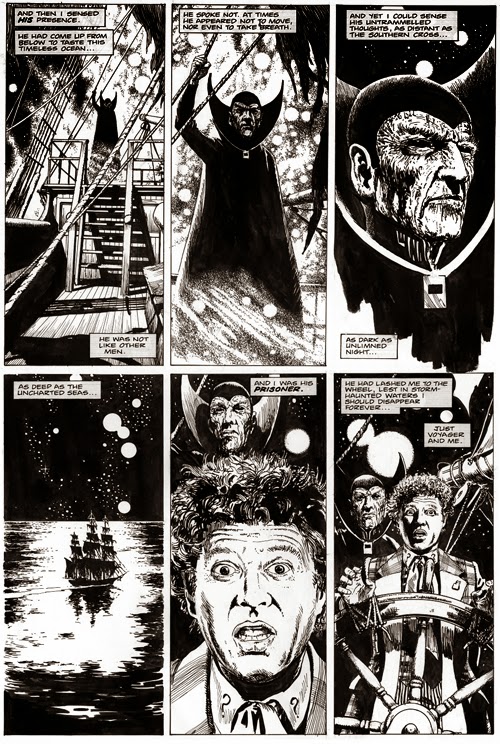 The Sixth Doctor’s stories were extraordinarily imaginative, at least in comic strip form. Even without having seen ‘The Twin Dilemma’ I think I must have realised that the surreal mind-bending visuals of stories like ‘Voyager’ and ‘Once Upon a Time-Lord’ were nothing like what was happening in the television series, but these strip stories gave me a deep and enduring admiration of Doctor Who in the comic strip medium.

1984 and the arrival of the Sixth Doctor has been occupying my thoughts a lot lately, and not just because of the thirty-year anniversary or talking to Colin and Nicola. I’ve reached the point in the writing of the second volume of The Comic Strip Companion in which I’m covering the earliest strip exploits of the Sixth Doctor. Thirty years is a long time, but as I re-read the pages of ‘Voyager’, marvelling at the gloriously surreal twists and turns of Steve Parkhouse’s surreal script and John Ridgway’s absolutely stunning illustrations, I can’t help but be transported back to that time when this was the only new Doctor Who.

I turned sixteen in 1984. I wish I could tell myself at that age that one day I’d be the author of a series of books about the comic strips, that I’d write the production information text for DVDs of those 1984 stories that I used to speculate about, and that I’d be chatting to the actors who played the Sixth Doctor and Peri. I’m not sure which of these facts would impress my younger self more. I’m not even sure he’d even believe me.
Posted by Paul Scoones at 9:25 pm No comments: