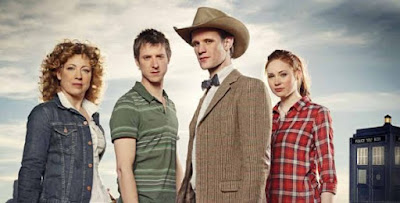 PS: Many thanks to Prime for inviting me along to the preview.
Posted by Paul Scoones at 11:09 pm No comments:

Rochelle and I arrived home on Monday evening after four days in Wellington. We were in the capital city for Armageddon, a comic-con style event that takes place there once each year. Rochelle runs an online sci-fi collectibles store, Retrospace, and has a stand selling her wares at each Auckland and Wellington event.

This year was the third consecutive Wellington Armageddon we’d attended as exhibitors, and by far our most successful. The success is measured not just in terms of revenue earned and volume of stock sold, but also logistically as it was the easiest and most effortless experience we've had running a Retrospace stand at Armageddon.

In past years we loaded up our vehicle with as much stock as we could possibly cram in and drove from Auckland to Wellington. This had its drawbacks as it restricted on the amount of stock we had available to sell and also meant that by the time we arrived to set up and start selling we were already shattered from a ten-hour drive, and that's not even taking into consideration the return journey.

This year Rochelle loaded the stock into two large packing crates and booked a freight company to take them down. We enjoyed a short flight from Auckland to Wellington, arriving refreshed, and ready to set up at the TSB Arena, located on the city’s scenic waterfront. 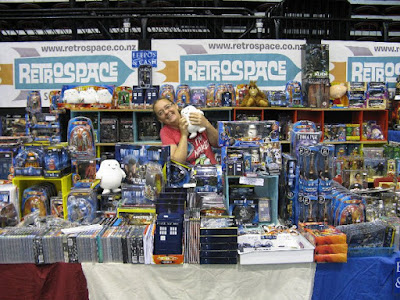 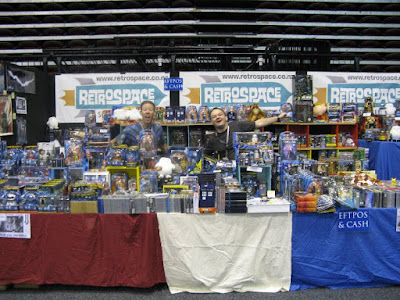 The Retrospace stand, before the doors opened on the first day.
Unlike previous Armageddon events, which had quiet periods, at this year’s event we had a fairly constant crowd of customers clustered around our stand. I believe the attendance numbers for the show were significantly up on previous years as we were hearing reports that on the Saturday people were being refused entry for a time due to overcrowding issues, and there are mutterings about needing to perhaps move to a larger venue.

While working on the stand I chatted to a wide variety of people. Some were so enthusiastic that they came dressed as their favourite character (there were quite a few Matt Smith Doctors both male and female), while at the other end of the spectrum there were those who seemed just a bit overwhelmed by it all. Some came over to chat about Doctor Who, drawn by the large array of merchandise we had displayed on our stand. I was even recognised from my appearances on the Doctor Who DVDs and a television item about Rochelle and me that screened on Close Up some weeks earlier. It seems I have my own local fan following, of sorts.

There were some interesting conversations, most memorably a debate between several teenage girls over whether David Tennant or Matt Smith was better. I ventured that I thought Smith was a slightly better actor, and got agreement from one girl, whilst another piped up that she preferred Smith because his sonic was bigger than David’s. Size, apparently, is important. 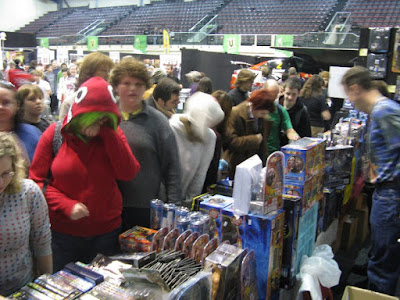 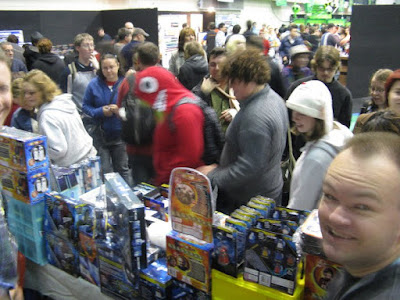 Feeling slightly overwhelmed by the crowd...
The event had an array of guests, including Colin Baker (the Sixth Doctor, Doctor Who), John Leeson (Voice of K9, Doctor Who), Katee Sackhoff (Starbuck, Battlestar Galactica), and several others, but I didn’t get to see any of their talks. Even with the invaluable assistance of those helping us out on the stand (thank you so much, Chris, Wade and Kim), it was rarely possible to get away for any length of time. I expected a quiet period whilst Colin and John were talking on stage, but this never occurred and we continued to have people buying Doctor Who merchandise from us during that time.

I did however get to meet John Leeson, who is a really lovely man. We discovered over drinks on the Friday night that we share a few areas of common interest and experience. I was also chatted with John’s lovely wife Judy who told me all about her work as a production buyer on such films as The Hours, The Golden Compass, and Martin Scorese’s latest, Hugo Cabret. Given her impressive background in movies, I thought that Judy ought to have been a guest speaker at Armageddon herself, but she was having none of it. 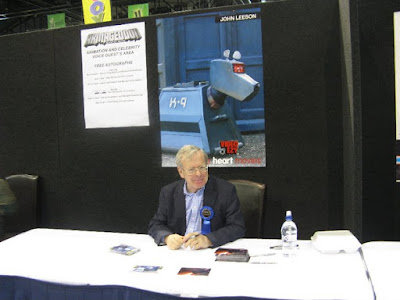 His Master's Voice - John Leeson
I also got to meet a couple of the animation voice artist guests, namely the charming Paul Eiding, whom I introduced to drinking cider, and Michael Sinterniklaas, the voice of Dean in The Venture Bros, and who uncannily looks a little like his animated alter ego. Michael told me he’s been a Doctor Who fan for years, and seemed as impressed to learn that I worked on the DVDs as I was that he worked on one of my favourite animated series. 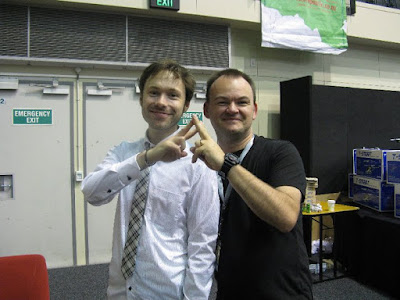 "Go Team Venture!" - myself and Michael Sinterniklaas
Roll on the next Armageddon, in Auckland in October!
Posted by Paul Scoones at 9:16 pm No comments: