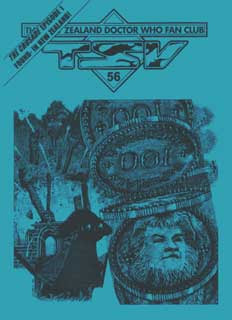 In 1998 Doctor Who Magazine published the results of their largest-ever poll, which tabulated 2,600 readers' votes for every Doctor Who story. The top-rating ten stories were showcased in issue 265 (the same issue I mentioned first sighting at the Fitzroy Tavern in my last blog article), in a series of ten essays by different writers each explaining why the story was deserving of its placing in the top ten.

This feature impressed me so much that I was inspired to do something similar for TSV. I hit on the idea of marking Doctor Who’s thirty-fifth anniverary in November 1998 with a mirror image of DWM’s Top Ten article; TSV's Bottom Ten would instead be a series of essays counting down the opposite end of DWM’s poll results. This evolved from an idea I’d had at the back of my mind for some time to run a series of articles defending and rehabilitating stories that were popularily perceived to be the worst examples of television Doctor Who. Timelash, for example has much to commend it but the prevailing view for the vast majority of fans is that it richly deserves its anagramatical epithet.

I assembled a diverse group of ten writers to contribute to this feature, drawing on several overseas writers, some of whom such as Gary Russell, Andrew Pixley and David J Howe I’d recently caught up with on my UK trip, as well as local TSV regulars. Such multi-contributor features are nerve-wracking for an editor. Usually if I was to commission ten separate articles from ten writers and only eight or nine arrived in time, I could simply publish the later arrivals (assuming they did arrive of course) in the following issue. But with a feature like The Bottom Ten this would only work with the whole set in the same issue.

The articles came in more or less on time - with one exception that crucially was the essay for the number one story, The Twin Dilemma which I'd assigned to Phillip J Gray. Phillip had won well-deserved acclaim for his article defending The Horns of Nimon in TSV 41. As the deadline slipped by without any sign of a delivery I discovered to my dismay that for reasons best known to himself, Phillip hadn’t even started work on his piece yet. I tried to cajole him into action on a regular basis and then resorted to a tactic that had worked for Douglas Adams' publishers.

The best-selling author of The Hitch-Hikers Guide to the Galaxy was notorious for not delivering manuscripts. Douglas Adams' oft-quoted line “I love deadlines. I like the whooshing sound they make as they fly by” neatly summed up his legendary procrastination when it came to writing. Douglas's exasperated publishers would resort to shutting him in a hotel room with only coffee, a typewriter and his editor for company to get him to complete a long-overdue novel. Apparently it worked.

I collected Philip from his flat one weekend, drove him back to my place, sat him in front of my television set with a notepad and pen and played all four episodes of The Twin Dilemma. I watched it with him, discussing aspects of the story with him as we watched. Armed with hids handwritten notes Philip then sat at my computer and composed the article. I don’t recall if strong coffee was also involved, but nonetheless this approach did the trick.

In light of this it is remarkable that the issue wasn’t overly delayed, coming out in January 1999, just a few months after its predecessor. That said, this issue was intended to be a mid-December issue, as evidenced by Erato’s Christmas-themed double-length Karkus strip. Rather unfortunately, history would repeat itself exactly a year later when another delayed issue saw further Karkus Xmas escapades again postponed until January. Perhaps though New Zealand fans are all too used to encountering Christmas specials out-of-season.

The issue also saw the debut of what would be another long-running Erato strip, this time featuring Pex. The reference to Cybermen in the basement of Paradise Towers is a long-standing notorious in-joke that for TSV readers reaches back as far as 1987 when TSV issue 3's news pages confidently reported that the denizens of Telos would make a surprise return in that television serial.

The issue featured a number of VHS reviews, including the TV Movie, which was available in New Zealand as a limited exclusive through Whitcoulls. I was working at this retail chain’s head office at that time and helped arrange this knowing that this video was sought after by local fans. With the E-Space trilogy boxset, I allocated each story to a different reviewer but claimed Warriors’ Gate for myself. Although I’d alreadly written about this adventure in TSV 37, I jumped at the opportunity to re-examine my all-time favourite Doctor Who story. I asked Alistair Hughes to do me a Warriors' Gate themed cover , and I was absolutely delighted with the dynamic, visually inventive result. Al also sent me a full page State of Decay illustration for the back cover that he'd originally composed for the front cover of In-Vision issue 49 (dated March 1994). The cover of that issue can be seen here, and the original colour artwork can be found in the TSV 56 artwork gallery. 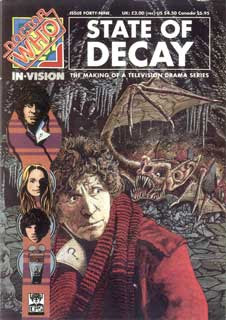 TSV 56 might have appeared even later than January if it wasn't for events that unfolded earlier that month compelling me to push to complete the issue as soon as I possibly could. TSV 56 was finally completed in a rush on the afternoon of Wednesday 13 January; the same day that my name appeared in a front page article in Auckland's New Zealand Herald newspaper. 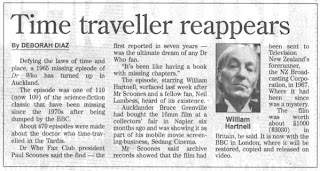 A couple of weeks earlier, myself and Neil Lambess had made a wonderful discovery. We'd followed up a lead that led us to a missing Doctor Who episode, The Crusade part one, in the possession of Auckland film collector Bruce Grenville. I negotiated with Bruce and arranged for the film to be sent to the BBC. I’d hoped to break this exciting news in the pages of TSV, and I’d also written an ‘exclusive’ report for Doctor Who Magazine, but the news broke earlier than I expected, attracting the attention of newspapers, television and radio. I was phoned by journalists from both TV1 and TV3 news at work on the Wednesday morning who wanted to interview me later that day. I took the rest of the day off work and in the downtime between television interviews and also a couple of phone interviews with local and overseas radio stations, I applied myself to finishing TSV 56.

The last item to go in was a news item about the discovery, and my up-to-the-minute editorial. That Wednesday was a rather mad day, in which, for a very brief time I gained a fleeting insight into the media madness that must go with being a famous celebrity or politician. A day or two later it was all over; no phone calls from television, radio or newspaper reporters - Warhol’s 15 minutes of fame came and went. Whenever I look at TSV 56 now it always reminds me of that one day of insanity.

Posted by Paul Scoones at 2:44 pm No comments: