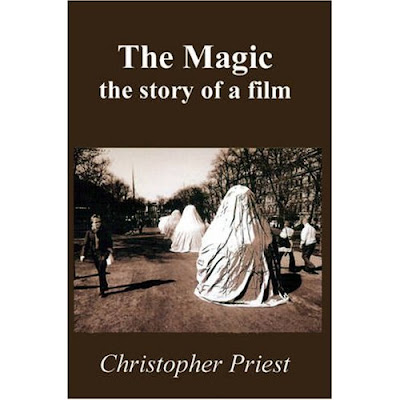 I first encountered the work of British science fiction author Christopher Priest in 1987 when I purchased a secondhand copy of his novel A Dream of Wessex in the Old Book Cellar on Albert Street, Auckland. That shop has sadly long since disappeared, but my admiration for Priest's writing has endured for more than two decades.

I have all of Christopher Priest's novels and short story collections, and own as many as four different editions of each book. In my defence I'll point out that Priest does sometimes revise his work in later editions so a certain degree of duplication is essential to keeping up a full set of his work (that's my excuse anyway, and I'm sticking to it).

Priest's books have sat untouched on my shelf for a few years now, not through any disillusionment, I hasten to add, but simply because he hasn't put out anything new to re-engage my interest in recent years; his most recent novel The Separation was published in 2002. I renewed my interest in Priest's writing when, whilst recently scanning my bookshelves for something to read, I pulled out The Separation (I only own one copy of this particular title!).

The Separation is a complex and compelling epic story following the lives of twin brothers who experience very different versions of the events of World War II. The novel presents conflicting, overlapping versions of reality and the reader is left to make sense of which bits are 'real' and which are illusory. It is a distillation of the recurring themes of identity, of mirrored experiences and of perceptions of reality which appear in many of Priest's books and short stories, and mark him out as, in my view, a simply outstanding writer.

While still engrossed in re-reading The Separation I was inspired to find out if there was any news of Priest's next novel, so I looked up his website. I'd discovered and bookmarked this a few years back but hadn't visited it in a while. I was pleasantly suprised to discover that in the interim Priest had established his own imprint, GrimGrin Studio, and had so far published four of his own books which were available to purchase via mail order.

I promptly sent off an enquiry email to Priest, with a heady mixture of awe and delight at the fact that I was communicating directly with someone whose work I had admired from afar for such a long time. I received a very pleasant and informative reply from the man himself, telling me all about his new and upcoming books. I sent off my paypal order last week and yesterday received four very handsome editions, all signed and personalised.

I've already finished reading one of those four books, The Magic: the story of a film. It is a fascinating insight into both the novel and the film versions of The Prestige. Even if you've never heard of Christopher Priest it's likely that you will be aware of this box-office-topping 2006 film directed by Christopher Nolan, with its all-star cast of Hugh Jackman, Christian Bale, Michael Caine, David Bowie and Scarlett Johansson.

The novel on which The Prestige is based was published in 1995, eleven years before the film's release. In The Magic Priest begins by revealing his inspirations and the writing process. I was astonished to learn that he wrote the novel as three drafts, each a complete re-write with no cutting and pasting from the previous version.

The narrative then moves on to various bids for the film rights, with Priest opting in 2000 to take a chance on the then little-known director Christopher Nolan. Nolan is best known today as the director of the incredibly successful Batman Begins and The Dark Knight, but back then all Priest had to go on was Nolan's low-budget, independent film The Following. Priest had no input on the screenplay for The Prestige, which was written by Nolan's brother Jonathan. He was keep so far out of the loop during the long period between the initial optioning of the film rights and the film's eventual release six years later, that incredibly his only source of information about the film was what he could glean from the internet via Google Alerts.

In his descriptions of going to see the film, at first at the press screening and twice more at the cinema, Priest appears to be an anonymous observer in the crowd; his only concern after the initial screenining is to dash off to his train, and is later able to eavesdrop apparently without fear of being recognised as cinema goers discuss the film.

The last few chapters of The Magic are given over to an analysis of how the film differs from the novel and Priest's views on what worked and what was less successful in the screen version. He might be forgiven for coming across as a little bitter at some of the decisions taken with the material, but it is a balanced, well-considered appraisal.

The two stage magicians, Borden and Angier, central to the story of The Prestige are rivals each seeking to comprehend the secret behind the other's 'vanishing man' act. It strikes me that there seems to be a slight metatextual echo of this in The Magic. It is a stretch to describe the two Christophers, Priest and Nolan, as rivals, but certainly there is an element of a clash in the British author and the Hollywood director's respective visions of the story in different mediums, but when Priest admits in The Magic that he is unable to figure out how Nolan achieved certain shots this seems to mirror something of the magicians' inability to discern exactly how the other's prestige is achieved.

The Magic leaves me wanting to re-read The Prestige, something I'm certain I'll do quite soon now that I have embarked on my re-read of Priest's oeuvre (right now, I'm mid-way through The Extremes), but I also want to re-watch the DVD of The Prestige. I was disappointed by the film the first time I saw it, feeling that it wasn't a patch on the novel, but having read Priest's own views on the film's strengths and weaknesses, I'm keen to give it another go.
Posted by Paul Scoones at 12:31 pm No comments: