I'm taking advantage of a short delay before the publishers are ready to begin work on preparing my book, The Comic Strip Companion 1964-1979, for publication to test it out on a small group of readers.
These enthusiastic volunteers have delivered invaluable feedback on the manuscript, enabling me to identify areas that need slight tweaks, additions or corrections. My readers, working in isolation to each other, have delivered quite different sets of notes - but they have almost all queried the same one specific point in the book.
The third story, latterly known as ‘The Hijackers of Thrax’ (the original title, if one existed, is unknown), appeared in TV Comic #690 (6 March 1965) to #692 (20 March 1965). The strip was later reprinted in Doctor Who Classic Comics #13 (10 November 1993). 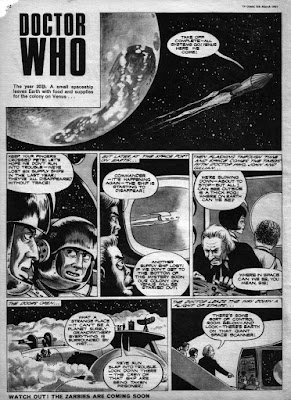 TV Comic was required to routinely submit a synopsis for each of their proposed strip stories to BBC Enterprises for approval. This was so that if something was considered to be too similar to an aspect of a planned television serial, or deemed inappropriate, it could be sent back to TV Comic with a request for changes before it was developed as a full script or an illustrated strip.

The storyline for the ‘The Hijackers of Thrax’ was submitted in January 1965. Donald Wilson (Head of Serials, Drama Television) asked Doctor Who producer Verity Lambert for her comments. Lambert wrote back, “It’s quite obvious what this is based on!! But it’s OK by me if it’s OK by you.” 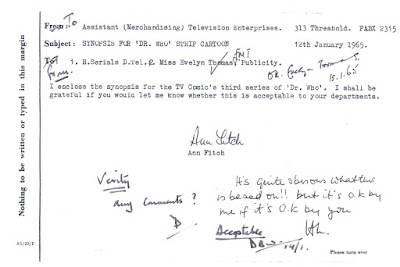 Is it “quite obvious” though? What did Verity think it was based on? This question has puzzled myself and my proofreaders.

Although the correspondence between Lambert and Wilson has survived, the copy of the synopsis which would have once been attached to this memo has not. It is reasonable to assume however, considering that the story was approved without changes, that the synopsis bore a strong resemblance to the strip as it appeared in print.

So what’s the story about? Here’s my summary:

A spaceship delivering food and supplies from Earth to a colony on Venus in the year 2075 goes missing soon after leaving Earth. This is the seventh supply ship to disappear without trace. The TARDIS lands on a space station where the crew of the missing supply ships are imprisoned. The station is run by Captain Anastas Thrax and his pirates. The station is hidden from Earth in a cloud of mist, and the hijacked cargo is sold on the black market. Thrax locks up the Doctor and his companions John and Gillian, but John overpowers their guard and frees the rest of the prisoners. Some of the prisoners leave in a supply ship to warn Earth about the space pirates. Led by the Doctor, the remaining prisoners overpower Thrax’s men. Thrax is captured and forced to show the Doctor the mist-generating machine. The machine is destroyed and the mist clears, revealing the location of the station to Earth’s space police, who arrive to apprehend Thrax and his pirate crew.

So what was it that Verity recognised as so familiar and obvious in this story?
Please let me know if you have any ideas, because I’m stumped!