What We Did On Our Holidays (Part 3)

Sunday was another brilliantly hot and sunny day. We stuck around to help clear up after the wedding reception and took some time out to explore some of the farm, including making the acquaintance of some sheep. After an afternoon BBQ with the bride and groom and various remaining guests, we bid a reluctant farewell to everyone who'd made us feel so welcome, especially Bruce and Carol who'd been wonderful hosts, and finally started on our trek across country.

We didn’t have much of a travel itinerary in mind, but having seen all the signs pointing the way to Arthur’s Pass as we’d travelled out to the farm, it seemed logical to keep going, and head for the pass and across to the West Coast. We got underway around 3pm and made our way through the sleepy settlement of Darfield – which seemed to be little more than a few houses and some tearooms – and then headed for the hills.

We stopped for a break in Otira Gorge near a railway station and sidings. The railway track lead out from the station across a large bridge over a chilly mountain river and on the other side the track disappeared into a tunnel. This is the longest railway tunnel in the Southern Alps, 8.5 kilometres long. In the years before the tunnel was built, the railway terminated here. As we took a walk by the river’s edge we heard the growing rumble of an approaching train through the tunnel, and found ourselves a prime position to witness a very long coal train emerge from the tunnel and cross the bridge, hauled by four massive locomotives. The coal train was barely clear of the bridge when it stopped, and was soon met by another huge coal train coming in the other direction on a parallel track. We watched as a complex shuffling of locomotives took place - the front two engines from the first train were uncoupled and were manoeuvred into position in front of the two engines on the second train. It seemed to be four locomotives were required to pull trains through the tunnel, as once the first train had departed the second train entered the tunnel. Perhaps those two locomotives only ever go from one end of the tunnel to the other? 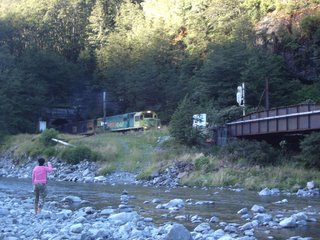 Above: The head of the train emerges from the tunnel mouth and approaches the bridge.

While we’d been watching the trains, we’d noticed the same police car drive up and down the same stretch of road several times. As we made our way back towards the campervan, a helicopter flew overhead and set down in a field close to the car park. The helicopter crew were met by the police and after some discussion and donning protective clothing the crew and police officers all took off in the helicopter and soared away over the top of the looming mountain ridge high above us. We learned from a newspaper a few days later that we’d witnessed the beginning of a hunt for a missing woman, an English tourist who’d failed to return from a walk. Unfortunately her body was discovered a couple of days later in the bush – she’d apparently fallen down a cliff.

We’d only travelled a short distance up the road when Rochelle noticed keas on the side of the road. We stopped so that Rochelle could get some photos. These cheeky native parrots are fearless and seem to love performing for tourists. They paraded up and down the footpath outside the Arthur’s Pass information centre and played chicken with the cars in the road. 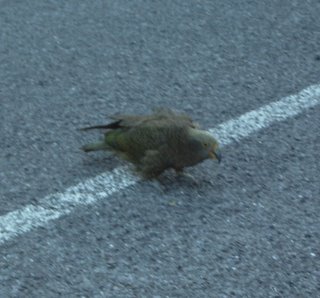 Above: Why did the kea cross the road? To entertain the tourists, that's why...

Driving on through the pass, we stopped for the night at Kelly Valley, a camping ground that was little more than an unsealed gravel road beside a river.

There’s nothing like washing in a river with water that’s melted off the snow-capped mountains to wake you up in the morning and let you know you’re alive. If the water was any colder it would have iced over!

We travelled on to Hokitika, where we stocked up on supplies – including bug spray, as we’d discovered that the van had a tendency to fill up with sandflies at night. We had a marvellous lunch in a restaurant where I discovered the delicacy that is South Island Blue Cod. This is a simply delicious fish, and for the remainder of our trip I sought out for takeaways that sold this. Unfortunately I’ve yet to find anywhere in Auckland that sells Blue Cod and I rather suspect that if and when I do find it that it’s going to be rather expensive. Hokitika has this great windswept beach littered with driftwood and rocks. We found some remarkable small green stones, polished by the waves just by walking a short distance along the beach. 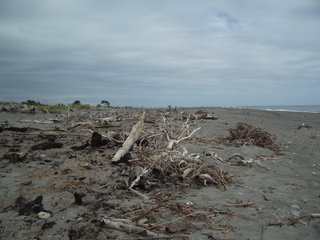 Above: The wild and windswept Hokitika beach, littered with driftwood.

From Hokitika we drove south, heading as far as Fox Glacier. As we approached, the skies darkened and by the time we pulled into the glacier car park a light shower of rain had started to fall. Undeterred by a little water, we set off along the track. As we walked, the rain got heavier and heavier and we were soon drenched to the skin. Close to the glacier itself, we were admonished by a tour guide leading a party of elderly tourists all decked out in full wet weather gear. We must have looked like a couple of drowned rats. “It’s only a little water!” I cheerily assured the glowering guide, who clearly disapproved of our light, summer attire. 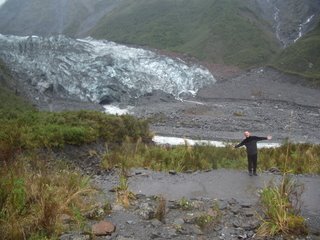 Above: Me at Fox Glacier. Freezing rain not pictured.

Despite the (by now) torrential rain, Fox Glacier was a truly impressive sight up close, looking for all the world like a massive surge of water, rushing through a valley, that had frozen solid in a blink of an eye. I risked taking a few shots whilst trying not to get my digital camera wet. By the time we got back to the camper van we were completely soaked and splattered with mud from the walking track.

We drove back to Franz Josef, a short distance back along the main road, where we tried our luck at the Franz Josef Top 10 Motor Camp. We were fortunate to get one of the very last vacancies for the night. The camp was fully decked out with kitchens, washing machines, clothes dryers, TV and games rooms and – most importantly of all – hot showers. There is nothing that quite matches the experience of getting out of freezing wet clothes and stepping under a piping hot shower. Sheer exquisite bliss!