Many years ago I trained as a Secondary School teacher. It seemed at the time like the best option to make full use of my university degree in History and English. I completed the one-year course, during which I taught in three different schools, and graduated with a Diploma of Teaching.

The problem was that after graduation there was a shortage of jobs in teaching. I could count the list of vacancies on one hand. The only use I made of my DipTch qualification was to do some short-term, private tutition work, helping students prep for their exams. Eventually I moved into other work, and left teaching behind.

My teacher training never seemed like a wasted year of my life; as a manager of a number of staff in three different companies, I've found that many of the basic principles of classroom teaching have served me well. My teacher training gave me the skills to be an effective communicator, to keep people on task, to plan effectively.

Much as I enjoy writing, it's not lucrative enough to sustain me financially, so I've been giving so thought about what I want to do next. Preferably something that leaves me with enough time to continue writing part-time.

So I've been thinking about relieving teaching. My DipTch is still recognised; I just need to do a retaining course to get back up to speed and get registered.

I started looking into this last week and learned that the goverment funds free courses for returning teachers, to encourage people like myself to get back into the profession.

TeachNZ, the teacher recruitment unit of the Ministry of Education, pointed me in the direction of my old alma mater, the University of Auckland. When I finally got through to the right person (which was a mission in itself), I learned that there is indeed a retraining course coming up, but there's some doubt over whether it will take place as the course has not received any funding.

If the funding doesn't come though, the course won't take place. Without this course I cannot register and I cannot teach.

Meanwhile in the newspapers and on the television we're told that the goverment is pouring millions into job creation schemes. How about putting some of that money into teacher training...?
Posted by Paul Scoones at 3:13 pm No comments:

I've reached an important milestone in the writing of The Comic Strip Companion.

As of tonight, I’ve finished the last of the chapters dealing with all of the Doctor Who comic strip stories originated in TV Comic, Countdown and TV Action magazines from 1964 to 1979, which is the period covered by this volume. I've so far written 159,311 words. I've written individual entries for 166 different comic strip stories or, to put it another way, 1,601 comic strip pages - and that's not counting all of the various reprints which I've also covered.

Most of the book is now written - but there's still more to be done.

There are other comic strips published during this period that, although they are not considered part of the regular series, it would be remiss of me not to cover them in the book. These include the strips that appeared in: the Doctor Who Annuals; the Dalek Annuals; the three 1960s Dalek books; The Daleks strips from TV Century 21 comic; and the American comic adaptation of the first Dalek movie. This material amounts to an additional 56 stories, which might sound like a lot but many of these stories are significantly shorter than the ones I've already covered. This extra material will form supplementary chapters located at the rear of the book.

I've also got some recently discovered archival material that I need to find places to write about in the chapters I've already written. This previously unseen material casts new light on the origins of the Doctor Who strip and provides additional insight into the development of a number of the early strips. The documents also include three story proposals which were never published. This information has never been published elsewhere and will undoubtedly be of great interest.

I need to devote some time as well to revisiting some of what I’ve already written. I started work on the book nearly two years ago and over that time I've gradually tweaked the format and style as I’ve progressed through the chapters. I need to revisit the earliest sections I wrote and do some revising so that the whole book ends up with a readable, consistent format and style.

Right now though, I feel a sense of achievement in having written all fourteen chapters that form the main body of the book. There’s a way to go before I’m done, but now it feels like the end is on the horizon.
Posted by Paul Scoones at 1:14 am 3 comments:

Going Down in History

I'm concentrating most of my time on writing my book (latest word count: 152,000 words or thereabouts), which is why I haven't blogged in the last month.

I do however want to take a moment to mention the lovely surprise I received on opening the latest issue of Doctor Who Magazine (#405) today. Editor Tom Spilsbury's 'On this Month' column (which takes a nostalgic look at a past issue) casts an eye over issue 275 from ten years ago, and covers the article I wrote for that issue (one of my first professional writing commissions), about the return of The Lion. I wasn't expecting this, so it was a delightful to see that Tom namechecked both myself and Neil Lambess, and even quotes Neil on his likening of the find to something out of Indiana Jones.

After all this time it's still a thrill to see myself and Neil remembered for our small contribution to Doctor Who history. 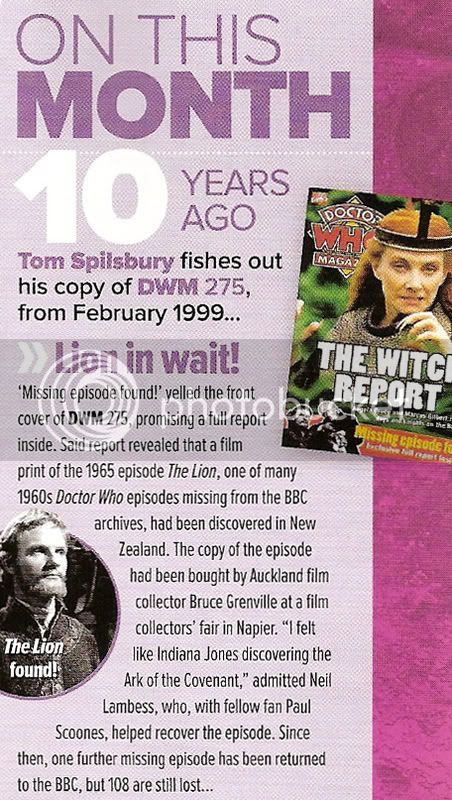 Posted by Paul Scoones at 5:06 pm No comments: