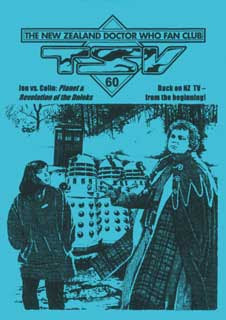 I was surprised to find my name mentioned in a recent issue of the really rather superb Canadian fanzine Enlightenment, where I’m described as holding the record for the longest-serving Doctor Who fanzine editor for my 15 consecutive years on TSV. I’ve never thought of my stint on TSV as record-breaking. 15 years is however a long time, and as I’ve progressively revisited each of the issues for the online archive, I can recall the various ebbs and flows of my enthusiasm for TSV. Issue 60, published in June 2000 - two-thirds of the way through that 15-year editorship - marked one such turning point in my commitment to the fanzine.

As the previous issue’s editorial indicated I had by this point become just a little weary of finding new things to say about the television series after ten years of waiting for it to come back. I was re-energised with enthusiasm however with the news in April 2000 that Prime television would be screening every complete story, from the beginning. I knew from the moment I first learned about this that it had the potential to deliver enormous benefit to TSV, both in the form of a fresh and relevant re-evaluation of the series, and additionally inspire an influx of new readers.

I first read the news in the Herald newspaper, when TSV 60 was in the early stages of assembly. I faxed off a letter to Prime the same day, introducing myself and telling them about the club, asking for information about screening dates to publish in TSV. A reply came back from Prime’s publicity department, asking me for advice and assistance. Over the next few months I fact-checked their press pack (correcting a number of inaccuracies before it went out to the media), composed the programme listing synopses for some of the Hartnell episodes and made two guest appearances on Alice Worsley’s Prime Living television show. Best of all, I was interviewed by the Listener, complete with the club's website address:

The Listener (13 May 2000).
Effectively I became Prime’s go-to guy for anything to do with Doctor Who. Prime's receptionists were briefed to pass on the club's contact details to anyone who called up wanting to know more about Doctor Who - which in turn boosted to TSV’s readership numbers (strangely enough the readership hasn’t increased in the years since Prime commenced screening the new series in 2005).

The Prime screenings were only just getting under way when this issue appeared, so the coverage only extended to my editorial, a news report and a mention on the front cover “Back on NZ TV – from the beginning!”). The issue was however packed with content. Recent video releases Planet of the Daleks and Revelation of the Daleks were examined by Peter Adamson and Alistair Hughes in Battle Beyond the Sofa. These two guys are big fans of the Sixth and Third Doctors respectively, but although this article provided an ideal opportunity to fight their respective corners, Peter reviewed Planet and Al reviewed Revelation. The talented duo also illustrated the front and back cover illustrations to support this article.

As I write this, the 2008 Auckland Armageddon pulp culture expo is just a few days away. This event has become a regular fixture for sci-fi, fantasy and gaming fans over the last decade, and to think that it ultimately evolved from organiser Bill Geradts’ monthly Auckland Chapter Doctor Who club meetings that he used to hold in his front living room! Armageddon has hosted several Doctor Who guests over the years, but the earliest was Jeremy Bulloch, who attended the March 2000 event, where Jon Preddle interviewed him for TSV. Bulloch was promoted at Armageddon as bounty hunter Boba Fett from Star Wars, but Doctor Who fans know him for his roles in The Time Warrior and The Space Museum.

Many of TSV’s most interesting articles, in my view, zero in on a particular aspect of the series’ fiction and attempt to reconcile this across all of the various media (TV, books, audios, comics, etc). A School for Scoundrels did just this with the subject of the Doctor’s school days, taking its lead from the extensive flashback sequence in Gary Russell’s then-recently published novel Divided Loyalties. The class ‘photos’ are fun too, and I’ve often wondered who Peter Adamson based each of the likenesses on.

Russell T Davies’ highly acclaimed drama series Queer as Folk screened on NZ TV in early 2000 and Neil Lambess and Nigel Windsor both contributed pieces for TSV 60 inspired by the series. It aggravates me a little that New Zealand television censors saw fit to take their scissors to certain scenes, but if that’s what it took to get it screened here at all then so be it. This was probably the first time TSV had ever mentioned Russell T Davies; the announcement that he was to revive Doctor Who was still three years away at this point, but there he is quoted in Nigel’s article, proclaiming “Oh I love Doctor Who!” I’m delighted to say that, despite the controversial nature of Queer as Folk, I never received a single word of complaint about the coverage of this series in TSV.

TSV 60 also sees the concluding half of my interview with Andrew Pixley, in which he talks about what he’s written other than DWM’s Archives (for which he is best known). In my frequent conversations with Andrew I recall that he was keen to dispel any notion that all he wrote was the Archives, so this was his opportunity as I saw it to put the record straight and talk about his wider interests, even those beyond Doctor Who. I love episode guide books, so I was particularly interested to get his views on what were the best examples of these.

The Foundation of Science by Jamas Enright marked the return of text fiction to TSV after a two issue absence. I’d had Jamas’s story in reserve for a year; it had been lined up to appear in TSV 58 and then 59 but each time I’d had to bump it due to space considerations. Aided by the lack of a comic strip story for this issue - and of course a keen desire not to have to apologise to Jamas for a third time - the story finally saw print.

These days Kelly Buchanan publishes Faction Paradox novels – a Doctor Who spin-off of sorts - through her company Random Static, but in TSV 60 she collaborated with Wade Campbell in on an informative and in-depth look at another series of spin-off books, the Bernice Summerfield novels. The article charts the entire 'Doctor-less' New Adventures range produced under the Virgin Publishing imprint. The article was timely as the series ended months earlier with Twilight of the Gods, Virgin’s very last New Adventure and in some ways the end of a decade-long publishing success story. Of course Bernice Summerfield went on to enjoy many more adventures in print (and on audio) under new producers Big Finish; perhaps it’s time for a follow-up article examining this range…?

In recent months I’ve been looking at a number of other online magazines and note that many of these (Shooty Dog Thing, Whotopia and Pantechnicon to name but three), offer issues as downloadable PDFs. I'm keen to do the same for TSV in addition to continuing to present the content as HTML pages. While I was preparing this issue for its online revival, I have also been reworking the original Publisher files to produce a PDF version of the issue. It’s not finished yet, but I’m intending to make this available soon.

Posted by Paul Scoones at 3:07 pm No comments:

What's the point of Postcodes?

NZ Post has just launched its "what's your postcode?" campaign to remind people about using postcodes, writes Paul. "My wife went to post a parcel at the Victoria St post office in Auckland's CBD and although the parcel was correctly addressed including the postcode, for Kaiwaka in Northland, the staff at the counter were unable to locate the code on their system and consequently informed her that they couldn't accept the parcel!"

The 'Paul' in this item is me. When Rochelle related the story to me, I got on the NZ Post website and used their postcode finder to look up the code she'd used in the address. It came up instantly with the correct details. I've no idea why the staff at the post office were incapable of doing this. Coincidentally, the glossy brochure from NZ Post promoting the Postcode education campaign arrived in our mail box on the very same day that this incident occurred!
Posted by Paul Scoones at 5:30 pm No comments: