Twin Peaks screened on New Zealand television in 1991. I was in my early twenties and watched every episode as it went out, read the books, and frequently discussed the plots with similarly obsessed friends. I haven’t thought about Twin Peaks in a long time, but the anticipated arrival this year of a television revival and continuation has re-engaged my interest in this much-loved cult classic. A long-time friend and fellow New Zealander, Morgan Davie, has created a Twin Peaks re-watch blog at The Ruminator that counts down to the new series debut.

Morgan notes on his blog that Twin Peaks arrived in New Zealand in April 1991, a year after the show’s US debut. Despite this long delay, and incredibly for a series that was slow to divulge its twists and turns, I didn’t find out who killed Laura Palmer until it unfolded on screen. This was of course years before the internet became commonplace, so perhaps this wasn't so remarkable. Good luck trying to avoid ‘spoilers’ when the new series airs.

This renewed interest in Twin Peaks got me thinking about my memories of watching the episodes on their original broadcast, so last week I decided to look up the screening dates in the New Zealand Listener. This weekly magazine, which has been around longer than television, most usefully publishes comprehensive television schedules. (The Listener was an enormously useful resource many years ago when I researched the entire transmission history of Doctor Who in New Zealand.)

Leafing through the bound volumes of 1991 issues, I discovered some interesting, long-forgotten facts about how and when Twin Peaks was screened here. The episode billings had descriptions, but not episode names or numbers so a bit of head-scratching and cross-referencing with online guides was necessary to work out exactly which episode screened on any given date.

Twin Peaks screened on TV3, New Zealand’s first privately-owned television channel. In 1991 it was still relatively new, having launched in November 1989. The pilot episode was scheduled to air on Tuesday 2 April 1991, in a two-hour primetime slot from 8:30-10:30 pm. The Listener took the unusual step of including a note in the billing: "At press time, TV3 were unwilling to confirm that Twin Peaks would definitely play at this time on this day." 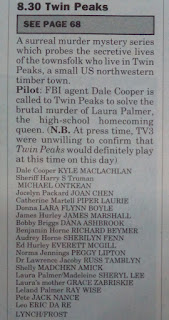 In spite of this uncertainty the magazine promoted the screening with the front cover strapline, “Twin Peaks, Weirdsville, USA”, and a two-page article entitled ‘Strange Crew’ by Shelley Howells, profiling each of the main characters. This was the first of several feature articles about the series that appeared in the Listener that year. The others included interviews with Peggy Lipton and Julee Cruise, a look at the Autobiography of Dale Cooper book, and an item about Twin Peaks fandom.

As it transpired, the Listener were right to be uncertain: the pilot did not screen on this date, and instead went to air exactly a week later, in the same timeslot on the evening of Tuesday 8 April 1991. That date is curious because it is exactly a year to the day after the US premiere.

Something prevented TV3 from screening Twin Peaks when originally advertised. No explanation was provided for the delay in the Listener, but I suspect that there may have been an embargo in place that prevented the series being screened here any earlier than the one-year anniversary. In their promotion for the series, the Listener mentioned the re-edited home video version of the pilot episode, advising viewers to “watch again – the telly version has a different ending”. So given that the video release was already available in New Zealand, were the rights surrounding this perhaps responsible for holding up the television broadcast?

Having effectively lost a week, TV3 seemed keen to make up lost ground, scheduling the first and second episodes of series one back-to-back in another two hour timeslot the very next day. From the following week, the series settled into a regular schedule of one episode a week on Tuesday evenings.

There was no break between seasons 1 and 2 as there had been in the US, which meant that NZ went from a year to only eight months behind. The double-length Season 2 premiere (episode 8) was split into two regular-length episodes here. A month later, the reverse occurred with two episodes (13 & 14) screened back-to-back. This reason for this appears to have been tied to the revelation of Laura Palmer’s killer at the conclusion of the latter episode.

The resolution of the ‘Who killed Laura Palmer?’ storyline in episode 16 appears to have put a massive dent in the series’ popularity, at least here in NZ. Episode 17 screened as usual on 22 July, but the following week Twin Peaks was abruptly absent without explanation (at least in the pages of the Listener). Taking its place was an episode of the new US crime drama Law & Order. TV3’s decision to yank Twin Peaks from the schedule might also have been precipitated by its recent cancellation in the US, with the final episode screening there on 10 June 1991.

Twin Peaks was off air for nine weeks, and when it returned it looked as if TV3 had lost all confidence in it. The series resumed without any fanfare on Monday 30 September, shunted into a graveyard timeslot of 11:05-12:05, as the last programme screened before the channel’s midnight closedown. Effectively it had been buried in the schedule. The final 12 episodes screened in this fashion, with the last episode going to air on 16 December, just over six months after the US.

An ignominious end for what had been, earlier that same year, a heavily-promoted primetime series.

(Episode descriptions from the Listener)

Pilot: ‘Northwest Passage’
NZ: 8 April 1991 (US: 8 April 1990)
A surreal murder mystery series which probes the secretive lives of the townsfolk who live in Twin Peaks, a small US northwestern timber town. Pilot: FBI agent Dale Cooper is called to Twin Peaks to solve the brutal murder of Laura Palmer, the high-school homecoming queen.

Episodes 1 & 2: ‘Traces to Nowhere’ & ‘Zen, or the Skill to Catch a Killer’
NZ: 9 April 1991 (US: 12 & 19 April 1990)
Cooper and Truman find out more about Laura’s secret life, and release James from jail – along with the malevolent Mike and Bobby. At the sheriff’s department Cooper demonstrates an unusual deductive technique.

Episode 3: ‘Rest in Pain’
NZ: 15 April 1991 (US: 26 April 1990)
Cooper uses the deductive powers of his unconscious mind to break open the case, the townsfolk gather for the funeral and Truman reveals the secret of the Bookhouse Boys.

Episode 4: ‘The One-Armed Man’
NZ: 23 April 1991 (US: 3 May 1990)
Cooper tries to match his dream with Sarah’s vision; Hawk stalks the one-armed man; Hank goes before the parole board and Audrey decides to conduct her own investigation of Laura’s murder with help from Donna.

Episode 5: ‘Cooper’s Dreams’
NZ: 30 April 1991 (US: 10 May 1990)
Cooper and Truman meet the Log Lady and find a gruesome crime scene in the woods. James and Donna take Madeline Ferguson into their confidence.

Episode 7: ‘The Last Evening’
NZ: 14 May 1991 (US: 23 May 1990)
Cooper and Truman’s investigation moves towards a terrifying end, Dr Jacoby’s meeting with “Laura Palmer” has bizarre consequences and Hank Jennings’s evil spreads to Josie Packard.

Episode 8 (part 1): ‘May the Giant Be with You’
NZ: 21 May 1991 (US: 30 September 1990)
Scorching questions remain in the mill fire’s aftermath; Jacques Renault is found dead; Audrey becomes a terrified prisoner and Donna puffs cigarettes.

Episode 8 (part 2): ‘May the Giant Be with You’
NZ: 28 May 1991 (US: 30 September 1990)
The community is shattered as several lives hang in the balance, Audrey is taken prisoner and Donna receives a strange message.

Episode 9: ‘Coma’
NZ: 4 June 1991 (US: 6 October 1990)
Agent Cooper gets some uncalled-for help, and some unwelcome news; Audrey is in more trouble than she thinks; Donna plans to meet a stranger; and a distressed Leland Palmer makes a frightening discovery.

Episode 12: ‘The Orchid’s Curse’
NZ: 25 June 1991 (US: 27 October 1990)
Cooper tells Truman where Audrey Horne is, Donna and Maddy plan to steal Laura Palmer’s secret diary and Benjamin Horne gets a surprise visitor and a business proposition.

Episodes 13 & 14: ‘Demons’ & ‘Lonely Souls’
NZ: 2 July 1991 (US: 3 & 10 November 1990)
Cooper and Truman raid One-Eyed Jacks, Donna and Maddy are at the mercy of an angry Harold Smith, Shelly and Bobby “welcome home” Leo and Cooper’s bureau chief stops in Twin Peaks. With some vital help from the one-armed man, Cooper and Truman’s investigations finally uncover the identity of Laura Palmer’s killer!

Episode 15: ‘Drive with a Dead Girl’
NZ: 9 July 1991 (US: 17 November 1990)
The one-armed man helps Cooper and Truman’s search for Bob, Lucy returns home with company and Bobby sets out on a new money-making venture.

Episode 17: ‘Dispute Between Brothers’
NZ: 22 July 1991 (US: 8 December 1990)
Agent Cooper and Truman bid farewell and a wake is held for Leland Palmer. Nadine may be able to go back to high school, Tremayne embraces fatherhood, and Audrey tells a new-found friend all about her ice cream preferences.

Episode 22: ‘Slaves and Masters’
NZ: 28 October 1991 (US: 9 February 1991)
Truman and Cooper try to track down Cooper’s former partner, Windom Earle, Ed Hurley cooks for Norma, Dr Jacoby changes the course of history, and James Hurley gets in trouble with the law.

Episode 23: ‘The Condemned Woman’
NZ: 4 November 1991 (US: 16 February 1991)
Truman watches as Cooper pleads with Josie for the truth, Ben Horne has a change of heart about the future of Twin Peaks, and James Hurley and Donna Hayward say goodbye.

Episode 24: ‘Wounds and Scars’
NZ: 11 November 1991 (US: 28 March 1991)
Agent Cooper and the sheriff’s department investigate caves at midnight, Truman wakes up to the murderous embrace of a naked woman and Audrey Horne and Donna Hayward witness a strange meeting.
(The wrong billing information was published - this was for episode 25. The error was noted in the Listener the following week)

Episode 25: ‘On the Wings of Love’
NZ: 18 November 1991 (US: 4 April 1991)
Cooper investigates caves at midnight, Truman wakes up to a murderous embrace and Audrey Horne and Donna Hayward witness a strange meeting.

Episode 27: ‘The Path to the Black Lodge’
NZ: 2 December 1991 (US: 18 April 1991)
Cooper and Truman continue their investigation of Owl Cave, Windom Earle takes a captive, Cooper and Annie find their romance blooming, and Donna discovers a scrapbook full of surprises.

Episode 28: ‘Miss Twin Peaks’
NZ: 9 December 1991 (US: 10 June 1991)
Cooper and Truman unravel part of the secret of the Black Lodge – but it might be too late. And the townsfolk gather at the Miss Twin Peaks pageant.

Episode 29: ‘Beyond Life and Death’
NZ: 16 December 1991 (US: 10 June 1991)
Cooper and Truman attempt to head off Windom Earle at the Black Lodge to save the life of Miss Twin Peaks. Nadine Hurley enrols in the school of hard knocks.

Posted by Paul Scoones at 12:39 pm No comments: