Series eight of Doctor Who recently finished screening here in New Zealand. The episodes, which screened as usual on the Prime channel, were transmitted a week following the UK broadcasts, screening here on Sunday nights at 7.30pm.

Viewer ratings indicated that these twelve episodes were watched by an average overnight rating of 123,273 people. Adding in time-shifted viewers (those who recorded the episodes and watched later), that average increases to 143,114.

Several of the earliest episodes, all screened during September, received the strongest overnight ratings.

Deep Breath received the lowest rating of the initial five stories on overnight results. This may have been due to the extended length of this episode, causing it to run an hour later than usual, finishing at 9.25pm. The episode’s strong performance in the timeshifted ratings, indicates that many viewers appear to have elected to record it for later viewing. The episode also premiered a week earlier in cinemas around the country, which may have also contributed to the relatively low rating for a series premiere.

The second episode, Into the Dalek, saw a sizeable increase in the overnight ratings, gaining 18,750 viewers. Ratings remained consistently high for Robot of Sherwood, Listen and Time Heist, with an average of approximately 135,000 across these four episodes.

The Caretaker, which screened at the beginning of October, suffered a sharp decline, dropping by 28,710 viewers from the previous week. Although the following episode, Kill the Moon, gained back some of the lost ground by picking up 11,140 viewers, the series never regained its earlier highs.

The strongest performing episode from the latter half of the series on overnights was the finale, Death in Heaven, on 128,570.

The two lowest rated episodes on overnight ratings were the aforementioned The Caretaker, on 106,520 and Flatline on 109,820.

Consolidated ratings, which include timeshifted viewers, who record programmes and watch after transmission, give a more accurate indication of the total audience. Robot of Sherwood in particular benefitted from these additional viewers, with 24.38% of its consolidated figure coming from timeshifted rating.

Conversely, In the Forest of the Night, which had an overnight audience of 123,070, placing it closest to the series average, suffered a drop to last place in the timeshifted ratings.

Doctor Who on Prime was placed in the same timeslot as some heavily-promoted and highly popular offerings on rival channels TV One, TV 2 and TV3. Doctor Who was usually in fourth place for overnight ratings in its timeslot, but for both of the last two weeks of the series it managed to make it into third place, edging out TV2.

TV One consistently gained the largest audience share for the timeslot. For nine weeks Doctor Who was placed against TV One’s My Kitchen Rules New Zealand (average overnight 373,161). For the last three weeks Our Big Blue Backyard instead occupied the timeslot (avg 463,370).

TV2 most often came in third place for the timeslot. For the first four weeks two half hour shows, The Middle (avg 201,312) and The Neighbors (avg 169,582) were up against Doctor Who. For the next five weeks the timeslot was occupied with a family movie, including such titles as Brave and Toy Story 3 (avg 225,670). The final three weeks saw the movies replaced with The Voice (avg 110,480). This series saw a marked drop in viewers for TV2, and the final two episodes of Doctor Who gained higher ratings than The Voice. 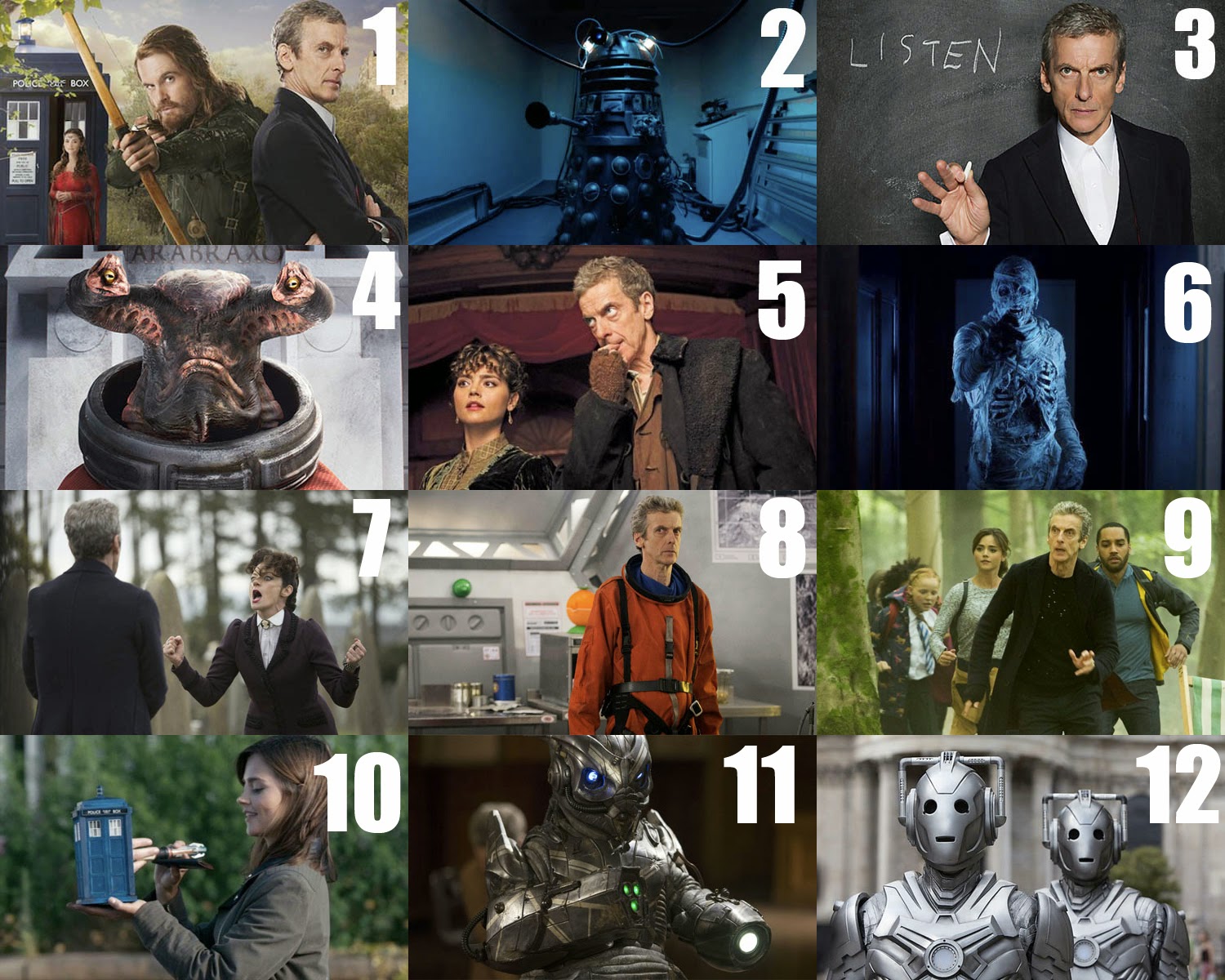 Doctor Who Talk at the Auckland Central Library 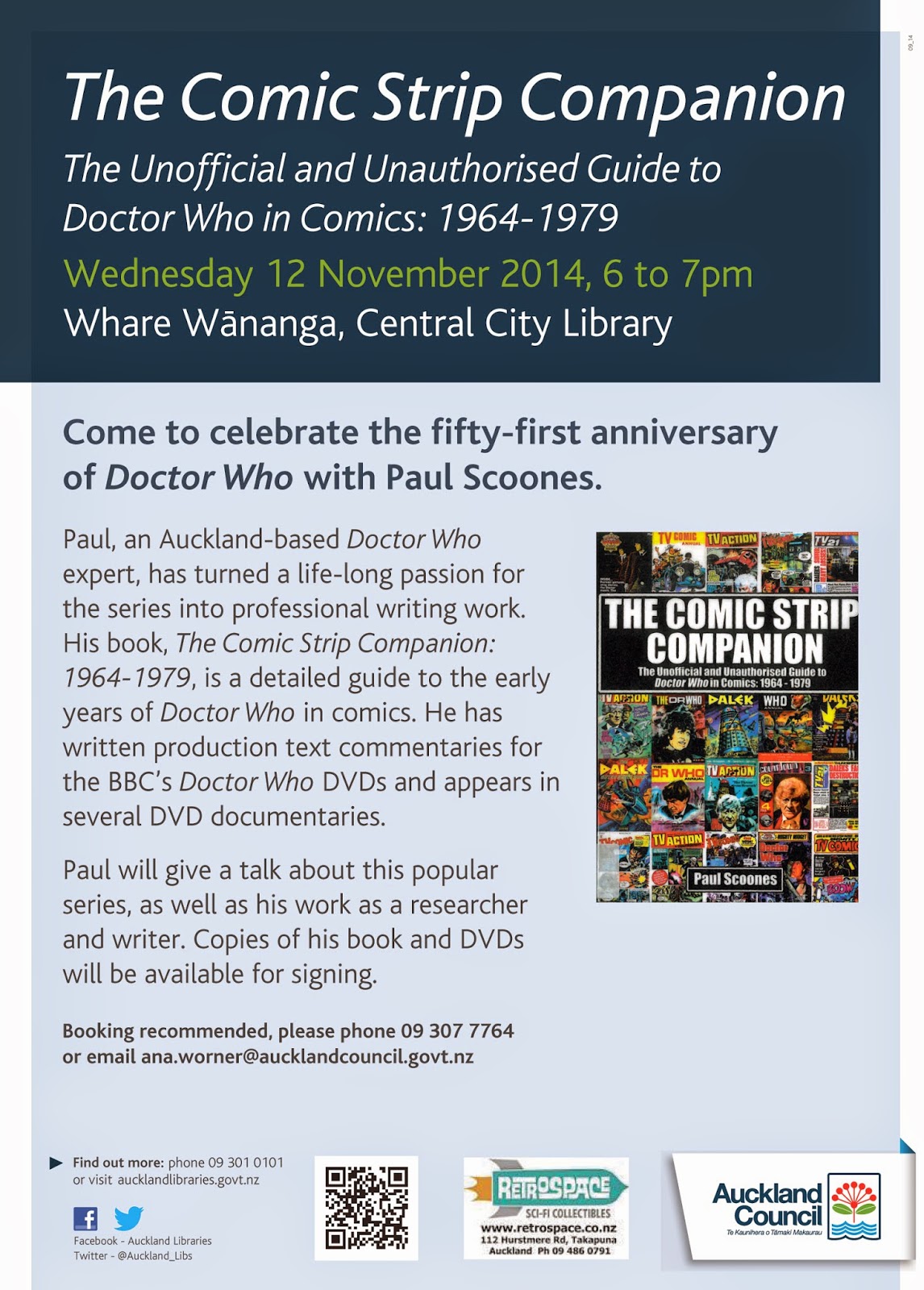 I will be giving a talk about Doctor Who this Wednesday 12 November 2014, from 6 to 7pm, at the Auckland Central Library.

The talk is to mark the 51st anniversary of Doctor Who - although of course here in New Zealand it is actually the 50th anniversary!

I'm be talking about several aspects of Doctor Who, including its long history, how it has been viewed in New Zealand, my passion for the show, my work as a writer/researcher for the BBC DVDs, and my book, The Comic Strip Companion.

The talk will be along similar lines to the very well-received one I gave at the Takapuna Library in 2013, and also at the national science fiction convention earlier this year. I'll be showing a number of images and some short video clips to illustrate my talk.

I will have limited quantities of my book and the DVDs available to purchase and get signed afterwards.