What We Did On Our Holidays (Part 2)

A very hot and brilliantly sunny day in Christchurch. We explored the central city on foot in the morning, checking out books, music and DVDs and realising that the shopping isn’t nearly as good as Wellington. Even Christchurch's Real Groovy store doesn't seem nearly as well stocked as their Wellington branch.

In the afternoon I left Rochelle shopping to get a lift out to the rehearsal for Adam and Sandra’s wedding. The wedding was held about 40kms out of Christchurch, on the bride’s family farm, in a remote area of countryside near Darfield. My main task was to start and stop the music during the ceremony but I also helped out with other preparations.

In the evening, myself, Adam and Karl (the best man) returned to the city. I collected Rochelle, who was by now quite hot and footsore from walking around the shops all afternoon and we all trekked off to a lovely outdoor pub called the Dux which specialised in its own specialty beers. I particularly liked the Ginger Tom, an alcoholic ginger beer. We were joined by Morgan and Claire – by a remarkable coincidence Rochelle and Morgan had crossed paths years earlier when Morgan had played the Doctor in a Doctor Who fan video recorded by Rochelle. Morgan had kicked Rochelle’s K9 down a hill. I think she forgave him!

The Dux has lager lamps. A lager lamp is best described as a very tall glass pipe with a beer handle at the bottom. The pipe is filled with beer and we got about three rounds out of each lamp. We got through two of these and were contemplating a third when commonsense prevailed as the groom and best man had an early start the following morning. 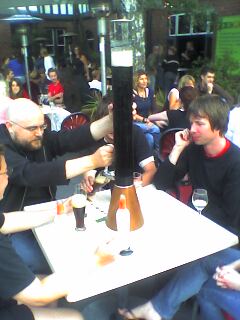 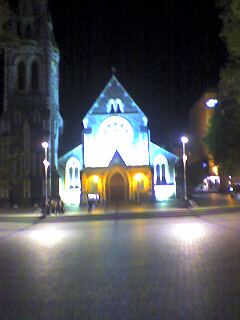 What is it about pub-brewed beer that doesn't leave you with a hangover the morning after?

Alas, this was the day that we bid farewell to our luxury apartment and started roughing it as campers. The morning was spent trekking out to the airport by bus, where we picked up our campervan that would be our home for the next week. We were very fortunate to get the van. We booked well in advance with Escape Rentals but they phoned us just as we were leaving Auckland to tell us that the van they had for us had been badly damaged in an accident by the previous hirers, and they didn't have any other spare vehicles. To Escape's credit they did all the phoning around for us and within a day had jacked up an equivalent-sized van with another rental company, Freedom. We learned when we picked up the van that Freedom had been working quickly to get it fully kitted out for us as it was a new addition to their fleet. All credit to them for doing this for us!

After stopping in at Papanui shopping centre to stock up on supplies we headed out into the rural backblocks of Christchurch for the wedding. There were a number of guests staying in caravans in an adjacent field so turning up in a campervan didn't look all that out of place. The wedding, which was held outdoors in the garden, went without a hitch. The weather was brilliant sunny - a little too hot maybe, so I was glad of having a legitimate excuse to dart into the shade to cue up each music track on iTunes. Unlike hot summer days in Auckland though, Christchurch has a dry heat so you don't get soaked to the skin with sweat, and it was generally quite bearable wearing a suit and tie all afternoon.

We were among the last to leave the wedding reception, after the majority of the guests and the bride and groom had departed for rthe city on a chartered coach, not long before midnight. We found our way through the darkness to our campervan and spent our first night in the middle of a farm paddock, under the stars, discovering that a mattress no thicker than an average paperback novel is not recommended for a good night's sleep.