Rescuing the Lion (Archived Interview from 2001)

Last week I celebrated the 20th anniversary of the discovery of the film print of The Lion, an episode of Doctor Who from 1965 that was among the series' missing episodes until Neil Lambess and I found it still existed in January 1999.

In revisiting some of the material associated with the find, I noticed that one of the interviews I did many years ago about the discovery disappeared off the internet at some point. The website that hosted the interview, Whoniversity.co.uk, is no longer active, but I was able to retrieve the interview I did in 2001 using the Wayback Machine.

I'm no longer in contact with the writer of the interview, Mark Parmerter, but I trust he won't mind me preserving the interview here.


Rescuing The Lion
Written by Mark Parmerter
May, 2001

Many Doctor Who fans may be hesitant to admit the fact, but be honest: who hasn't fantasized at least once about being the next to discover the whereabouts of a missing episode and successfully returning it to the BBC and fans around the world? For two New Zealand Doctor Who fans, this fantasy became reality in January of 1999 when Paul Scoones and Neil Lambess located the otherwise missing first episode of a 4-part William Hartnell adventure first broadcast on BBC-1 on March 27, 1965. The dramatic story of how The Crusade, Episode One: The Lion was rescued and loaned to the BBC for copying purposes is related in great detail in an article written by Paul Scoones for the New Zealand Doctor Who Fan Club; here in this article, however, Scoones has kindly agreed to further discuss The Lion's rescue, highlighting his initial reactions to the find, remarking upon the worldwide attention generated by the discovery, and speculating upon the possibility of future missing episode returns.

Very early in 1999, Scoones was contacted by fellow New Zealand Doctor Who fan Neil Lambess, who asked Paul to bring his video camera and join him in a visit to private film collector Bruce Grenville. Acting on a lead, Lambess had reason to believe that The Lion was included in Grenville's 16mm film collection. Scoones explains that prior to this event, "I had spent a great deal of time over the last 12 years researching Doctor Who screenings on New Zealand television (we were the first country outside the UK to screen the series), and I knew from what myself and other NZ researchers had found that most Doctor Who film prints in NZ had either been exported or destroyed many years ago, so I didn't hold out much hope of ever finding anything. Neil Lambess had always clung to the belief - long before The Lion was found - that there were missing episodes here. He still hasn't given up searching."

When Paul and Neil sat down with Grenville, who was unaware of The Lion's rarity having bought it cheap at a film collectors fair, they watched the 16mm film print in question and knew immediately that they were viewing a genuine missing episode. Paul's first thoughts during these exciting moments? "My first thoughts were along the lines of "Oh my goodness - what are we going to do?" I think when I was sitting there watching the episode that first time what was running through my head was how to get it back to the BBC. At that time we weren't sure if Grenville would even loan it out. I was really worried that he might very well decide to hoard it away, and the only copy anyone would ever get to see would be my handi-cam version recorded off the screen. Fortunately, that wasn't the case." After contacting Steve Roberts of the BBC's unofficial Doctor Who Restoration Team, negotiations were underway with Grenville for the BBC to borrow the film print for copying, and news of the discovery literally spread around the globe. 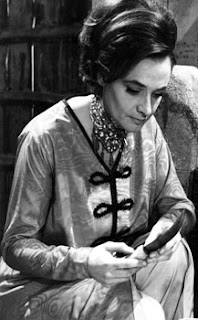 The Season Two historical adventure The Crusade has always been highly regarded and praised. In Peter Haining's twentieth anniversary book Doctor Who - A Celebration (1983), Jeremy Bentham writes "Director Douglas Camfield pulled off a considerable coup with this story. Armed with what he considered to be the finest script he has ever worked with, he managed to persuade big-name actor Julian Glover to play the part of King Richard I - Richard the Lionheart. The grand confrontation between Glover, as Richard, and up-and-coming actress Jean Marsh as Joanna made for one of the finest moments of television drama ever witnessed in Doctor Who." In the Doctor Who Handbook - The First Doctor, authors Howe, Stammers and Walker exclaim "David Whitaker's scripts are brilliant, Douglas Camfield's direction immaculate and Barry Newbery's sets superb. William Hartnell...turns in one of his best ever performances as the Doctor." And upon its discovery, Gary Russell proclaimed in Doctor Who Magazine #275 that The Lion "Is an example of historically detailed Doctor Who at its very best, with charm, wit, style and conviction."


Scoones admits he was quite surprised at the time by the worldwide attention which The Lion generated. "It was a surprise, yes. For a few days, it was like what I imagine it must be to be a minor celebrity. My phone rang constantly with local and overseas TV stations all wanting an interview, and I was on both television news channels here in NZ, as well as the story appearing on the front page of the newspaper. The media attention was remarkable."

Even more remarkable is the colorful history behind the film print of The Lion. Research has revealed that this particular film print somehow managed to survive near-burial at a Wellington rubbish tip in 1975, thereby passing from one New Zealand film collector to another for the next quarter century, persevering through owners ignorant of its worth and poor storage conditions. As Scoones illustrates, "It is a remarkable story. Its survival is a combination of good luck and dedication on the part of the film collectors who originally rescued it from the dump. What's worrying, however, is that until 1999, no one whose hands the film passed through had any awareness that the film was in any way rare or valuable. Hopefully, due to the high media exposure its recovery received, film collectors are now aware to look out for Doctor Who film prints."

Hopeful fans would like to believe that perhaps more missing Doctor Who material is waiting to be discovered elsewhere in New Zealand, either via film collectors or TV archives. Scoones cautiously believes "It's always possible that something will show up, but I think the news stories about The Lion's discovery which circulated the globe probably did more to raise awareness than any BBC orchestrated campaign could have ever done, and if there were episodes in private hands its likely we'd know about it by now. And I don't subscribe to the belief that there are selfish film collectors knowingly hoarding away missing episodes. I think that's a fan myth. I'd like to believe that sooner or later, human nature would prevail, and the owner of any missing material would come forward and allow the BBC to take a copy. There's far more prestige in being a generous benefactor than a secretive hoarder."

And as for the likelihood of lost episodes still residing in New Zealand's TV archives, Scoones reveals that "TVNZ's own archives have been thoroughly catalogued and we know from internal records that no missing episodes survive there. About a decade ago, Graham Howard gained permission to go through a Wellington film store of old television episodes, and although he found two film cans labeled with missing Doctor Who episodes (Marco Polo Episode 7 and The Moonbase Episode 3), the film cans had unfortunately been reused and no longer contained the original films. I think if there are any more missing episodes to be found, they'll be residing in as-yet uncatalogued television vaults somewhere else overseas." 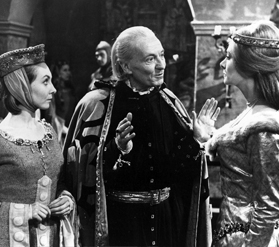 Once owner Bruce Grenville realized the value of his missing episode film print, he announced plans to sell it at auction. Initially, his plan was to auction The Lion in September 1999, but this event was canceled due to a surprising lack of interest. A second attempt to sell the print at auction was successful, and the print was sold by Grenville to another New Zealand collector for US$850. This same collector then auctioned The Lion on eBay.com with the final price reaching an astonishing US$3150! However, the winning bidder never paid up, and The Lion was offered again on eBay between January 1-15, 2000 (almost a year to the day that the episode was found). 43 bids were received, and the final price at which the film was sold was US$1275. Neither the buyer or seller's identity was disclosed...


The story of The Lion's dramatic rescue did not end, however, with its discovery. That was just the beginning, as Scoones discovered once attempts were made to transfer the film print from New Zealand to the BBC. "I'd always believed that the BBC would be prepared and set up to smoothly handle the recovery of missing episodes, but the reality is surprisingly different. I spoke at length in an article for The Disused Yeti over the problems I had with receiving reimbursement for mailing costs and the debacle over the crediting of the people involved in the find. I was for a time very pissed off about the whole thing; not so much for myself, but for my friend Neil Lambess, who actually tracked down the episode in the first place, and received negligible recognition. His name appears nowhere on the UK packaging or credits of the video." And what was the BBC's response when Grenville announced his intention to auction the print off? "Incredibly, the BBC threatened legal action over his ownership of the print - how's that going to encourage people to come forward with missing episode prints? Sheer incompetence, really." The BBC later reversed course regarding its threatened legal action, but the damage had perhaps already been done.

One may assume that the BBC has since developed new policy for facilitating the return of missing episodes, but Scoones does not believe this to be the case: "I recently was contacted by a BBC producer searching for missing episodes of Dad's Army, who sadly informed me that nothing has changed and that there's a very real risk that members of the public who approach the BBC through their general phone lines about missing episodes would be turned away through ignorance. It's a sad situation, but the BBC is a huge corporation full of people who don't care about the wider picture and are only interested in their particular area. Any approach to the BBC about missing episodes - unless made through people who care, such as The Restoration Team - is likely to fall on deaf ears."

On a positive note, fandom may now enjoy another long-lost look at Doctor Who's prestigious past while hope has been renewed that further lost episodes may still exist somewhere, waiting to be found. Justifiably, Scoones feels great pride in his and Neil's contribution to fandom: "Whenever I come across a mention of the story or The Lion in particular, in articles or reference books, it always provokes a tingle down my spine, knowing that I helped to recover it. I'll never forget the night before I sent the film print off to the UK; it was a strange sensation to have the film print sitting on my desk at home and thinking how unique it was, and how many hundreds of fans around the world would just love to get their hands on it!"

Posted by Paul Scoones at 4:29 pm No comments: