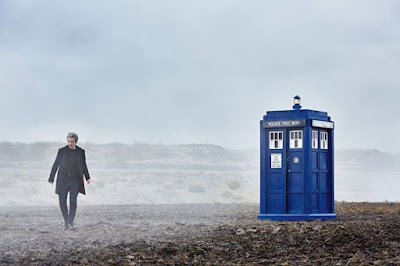 Good news! Prime has announced that Series 9's episodes of Doctor Who will be screened in New Zealand at 7:30pm on the Sunday after the UK Saturday broadcast. That means that we are only a matter of hours behind. A simultaneous broadcast would be 6:30am, so Prime’s screening will be 13 hours later.

Although one-off specials have appeared on Prime soon after the UK in the past, this will be the first time that a full series of Doctor Who has aired here so promptly.

Looking back over the past decade of Doctor Who, New Zealand fans have not always been so fortunate.

Back in 2005 when the revived series launched with Rose in the UK on Saturday 26 March, there was no indication of when New Zealanders would get to see it. The series finally arrived here on Thursday 7 July, 103 days later.

If this long delay seemed intolerable, there was worse still to come. The first Christmas special, introducing David Tennant’s Doctor, was delayed by more than six months. The Christmas Invasion was held back to open the second series, so New Zealand finally got to see it on Thursday 6 July 2006, 193 days later! Series 2 (New Earth to Doomsday) began screening the following week, 89 days after the UK. This was a slight improvement on the treatment of the 2005 series, but only by two weeks.

In 2007 the Christmas special was again held back by Prime and stuck on the beginning of Series 3. Whereas the first two series had both opened in July, Series 3 did not commence until late August, resulting in an even longer gap between UK and NZ transmissions. When The Runaway Bride screened on Sunday 19 August 2007 it set a new series record delay of 237 days.

The first six episodes of Series 3 (Smith and Jones to The Lazarus Experiment) had a delay of 148 days. This gap was reduced by a week to 141 days for the latter half of the series (42 to Last of the Time Lords) simply because the UK took a one-week break mid-series.

2008 was the last to have such long delays for a run of episodes. Once again the Christmas special was held back to open the new series. Voyage of the Damned screened on Sunday 13 July 2008, a delay of 194 days. The first half of Series 4 (Partners in Crime to The Unicorn and the Wasp), had a gap of 99 days, that reduced by a week to 92 days for Silence in the Library to The Stolen Earth, and a further reduction to 85 days for the series finale, Journey’s End, as the last two episodes were screened back-to-back in New Zealand on 28 September 2008, 12 weeks after Series 4 concluded in the UK.

There was no new series in 2009. The Next Doctor, 2008’s Christmas episode, was scheduled as a one-off special on Prime, however it still suffered a long delay before screening on Monday 13 April 2009, a delay of 109 days.

Thereafter, the situation began to improve as Prime gradually moved its screening dates closer to those in the UK. The lack of a full series in 2009 to have to find room for in the schedules may have helped in this regard. The next special, Planet of the Dead, aired on Monday 1 June 2009, 51 days after the UK.

The gap closed considerably for The Waters of Mars, which aired on Sunday 29 November, just 14 days after the UK. In fact New Zealand appears to have been the very first country outside the UK to screen this story (Australia first screened it a week later, and Canada and the US both aired it the following year).

David Tennant’s last story, the two-part The End of Time, wasn’t quite as prompt to arrive here, screening on 7 and 14 February 2010, 44 days after the UK.

The arrival of Matt Smith’s Doctor saw Prime making further inroads into the delay for a run of episodes. Series 5 (The Eleventh Hour to The Big Bang) screened from Sunday 2 May 2010, 29 days behind the UK.

The 2011 series was split in half for both the UK and NZ. The first half, The Impossible Astronaut to A Good Man Goes to War, screened here from Thursday 19 May 2011, a delay of 26 days. The second half, Let’s Kill Hitler to The Wedding of River Song, screened from Thursday 15 September and had only a 19 day gap.

The next Christmas special, The Doctor, the Widow and the Wardrobe, screened here on Thursday 19 January 2012, 25 days after the UK.

The first half of Series 7, Asylum of the Daleks to The Angels take Manhattan, screened from Thursday 13 September 2012, a gap of just 12 days, which was at the time the shortest delay NZ had experienced with the new series.

Even better than this, the 2012 Christmas special The Snowmen screened less than a day after the UK, on the evening of 26 December. This next day arrangement has been repeated for successive Christmas specials.

The latter half of Series 7, The Bells of Saint John to The Name of the Doctor, was again a 12 day delay, with the run of episodes commencing on Thursday 11 April 2012.

The 50th Anniversary Special, The Day of the Doctor, was simulcast in many countries around the world, but New Zealand was very slightly delayed. Had this country joined the simulcast, the story would have aired at 8:50am but instead it went out just 10 minutes later, screening at 9am, on Sunday 24 November. This time delay was apparently because Prime's schedules dictated that the programme started on the hour.

The 2013 Christmas special, The Time of the Doctor, screened less than a day after the UK, on the evening of 26 December.

Peter Capaldi’s first series, Deep Breath to Death in Heaven, screened from Sunday 31 August 2014, only a week after the UK.

Finally, Last Christmas screened less than a couple of hours after the UK, going out on Prime at 9am on 26 December 2014, and making New Zealand once again the first country outside the UK to screen the story.

Which brings us up to date. Until now, next day screenings (which are effectively the same day given the timezone difference), have been the province of one-off specials, but with Series 9 screening from Sunday 20 September, Prime has committed to giving full series the same treatment. The time when New Zealanders had to wait days, weeks or even months to see new episodes of Doctor Who are hopefully gone forever.
Posted by Paul Scoones at 12:46 am No comments: