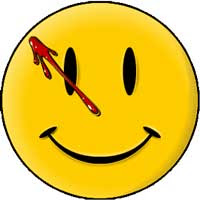 David Bishop introduced me to Watchmen when he loaned me the graphic novel sometime in the second half of 1989. I was sceptical as I'm not much of a fan of superhero comics, but David assurred me that this was something different, something extraordinary.

Watchmen blew my mind. It opened my eyes to the wondrous potential of comic strip narrative structure. I marvelled at the dense, multi-layered plot, the frequent time shifts, the metaphors, hidden clues in the artwork and the sheer scale of the story.

Twenty years later, I've just seen the movie version on the big screen. I can't think of any other movie project that has spent as long in development as this one. I've waited years to see it, and thankfully it didn't disappoint.

The direction was superb, clearly taking many visual cues from pages of the comic. It was an odd sensation recognising so much of the imagery as familiar in a movie I had never seen before. It was equally jarring when the movie did diverge from its source material such as, for example, the outward appearance of Veidt's Antarctic fortress.

The cast for the most part were very good indeed; I especially liked Patrick Wilson's Dan Dreiberg and Jackie Earle Haley was just perfect in the pivotal role of Rorschach. Malin Akerman's performance as Laurie was however disappointingly a bit flat. Maybe she was directed to underplay the part, but I didn't engage with the character as much as I did with the other costumed heroes.

I've read that the movie has had at least half an hour cut from the theatrical release, which will be reinstated for the DVD. Although I could see the gaps I believe that's because I'm familiar with the source material. It looked pretty seamless to me on screen, and the only exception I can think of being Hollis Mason, most of whose scenes were chopped, leaving him as a character who crops up briefly early in the movie and is never seen again.

The major difference between the comic and the film is the ending. I wasn't expecting this to be the case, but I actually prefer the movie version. I don't believe that a giant squid-like alien would have been in keeping with the tone and style of the rest of the movie. I always thought it jarred a little in the comic.

Just as in the comic, there's a lot to take in when watching the movie, and I suspect that it will reward multiple viewings. I'm certainly very much looking forweard to getting hold of the extended version on DVD.
Posted by Paul Scoones at 10:32 pm No comments: