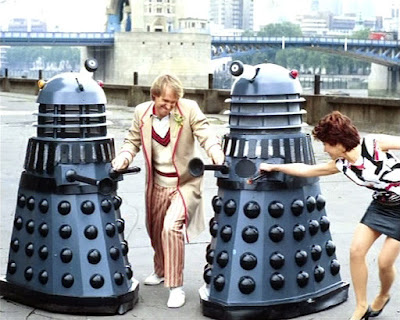 This latest set is for the Resurrection of the Daleks Special Edition DVD. Normally I have to wait some months after I’ve written subtitles for a story before I can discuss it openly, but on this occasion there is no such impediment to disclosure, since the title has already been announced by 2|entertain as forming part of the Revisitations 2 box set, which is due out (I think) around the middle of next year.

I was offered the commission for this story, along with the of The Caves of Androzani Special Edition two years ago, just after I delivered the Production Notes for Planet of Fire. I had demonstrated with that first job that I could do the work to the required standard and as these two stories book-end Planet of Fire, I was the obvious choice to tackle both.

While I was very keen to do The Caves of Androzani, being as it is a very highly regarded story which regularly tops polls of favourite stories (even beating out Blink in last year’s Doctor Who Magazine survey), I was less enthusiastic about Resurrection of the Daleks. It is not so much that I dislike the story, though it pales in comparison to Androzani, but rather that I had a feeling of ‘been there, done that’ about this one.

I had written a fan novelisation of Resurrection as a not-for-profit book a decade ago (ebook available here). In order to write that book I had scrutinised the story in great detail. I knew every character, every scene, every line, intimately. The prospect of going back over old ground did not thrill me but I did not want to pass up the opportunity of more work. The idea that I could have a sequential ‘run’ of stories on DVD was appealing, and my past familiarity with the story could also work to my advantage by speeding up the writing process. So I agreed, in September 2008, to do both stories.

For the next two years, Resurrection sat on the back-burner while I tackled other projects. My third set of subtitles (for a story which for the moment must remain nameless since it has yet to be announced), was completed in September. Following this delivery, I had just two months to produce the Resurrection subtitles from start to finish. I knew this was achievable but there was little margin for error.

As soon as I started work on Resurrection I discovered that the time-coded DVD I had been supplied refused to play. The time-codes are an essential part of the subtitles script, defining the precise placement of each block of text on screen. I usually like to get the time-codes worked out early on, but this time I had to rethink my process so that I wasn’t unduly delayed whilst I waited on a replacement time-coded disc to arrive from the UK.

The penultimate week before the delivery date was already booked up with helping Rochelle run the Retrospace stands at Armageddon, during which I would be unable to work on the subtitles so I had to work around this. Then, directly after Armageddon, I came down with a severe cold which I almost certainly caught at the expo. This meant that I was sick throughout the last week I had in which to finish the subtitles, so as much as I just wanted to crawl into bed, I soldiered on and managed to deliver the complete set of subtitles on schedule.

I'm relieved that, despite the haste with which these were written and the obstacles I encountered along the way, this latest set of subtitles was approved with relatively few changes.

I’ve now resumed working on revisions to my much-delayed Comic Strip Companion book, something I had to put aside while working on the subtitles. Although I'm still writing about Doctor Who, it is still a big change to move from short, pithy blocks of informational text to long-form prose critiques and analysis; from grim Dalek massacres on DVD to the Doctor's slightly bonkers but ever-so-charming exploits in the pages of TV Comic.