Doctor Who: The Collection - Season 26 blu-ray set was released in January 2020. I was commissioned to write the production information text for the season's opening story, Battlefield.

There are many contradictory versions of the legends of Arthur. Battlefield doesn’t follow one text but rather borrows bits and pieces from a wide variety of different sources. I was delighted to find in the stacks at my local library a copy of The New Arthurian Encyclopedia, edited by Norris J. Lacy, which documents the origins of the various fragments of the legend, helpfully arranged by topic. This was invaluable as Battlefield scriptwriter Ben Aaronovitch was on record as having used Lacy’s book for research. The library’s copy was a revised and updated edition from the 1990s. Curiously, one of the additions is a write-up about Battlefield in a section about the depiction of Arthurian legend in television series. (The authors seem to have been unaware that one of Aaronovitch’s sources was close to home.) 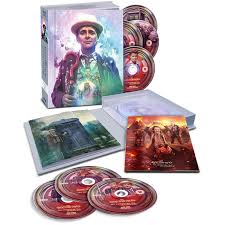