This advert for New Zealand company Powershop (a standalone subsidiary of state owned Meridian Energy) is currently appearing on various pages on the news website Stuff, and presumably elsewhere as well.
Last month Powershop were forced to drop another advert in this campaign which featured an Darth Vader, following a request from Lucasfilm's lawyers who understandably objected to the unauthorised use of the character.
Powershop are now using an image closely resembling a Dalek. Close enough I believe to raise the ire of the BBC and Terry Nation's estate. There is certainly no wording an the advert to indicate that either party has approved its use.
The artwork isn't terribly original either. It is clearly based on artist Richard Jennings' cover of The Dalek Book, published by Panther Books/Souvenir Press in 1964. 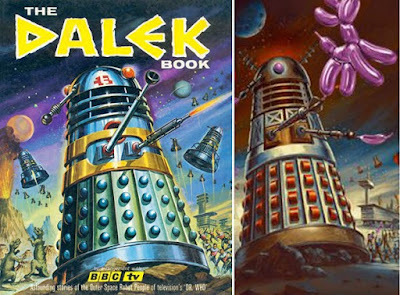 Addenda...
In addition to the online adverts, this artwork is also being used by Powershop elsewhere. Posters featuring Powershop's Dalek have been spotted on display in bus shelters around New Zealand. 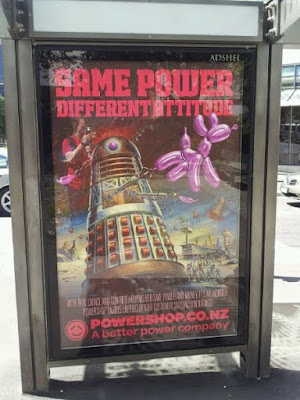 The above photo was taken by Simon Granville (that's his reflection!) at the corner of Victoria and Dixon streets in Wellington on Saturday 21 January.
Simon says, "I've seen the poster in a couple of other places too, including along Arthur St on Wellington's bypass and on a huge poster on the side of a building on Stout St near the train station, both highly visible places." Simon adds that the posters have appeared very recently. "I first saw them on Saturday, and I would have noticed if they'd been there last weekend, so they're only a week old at most."
Incredibly, there's more. Powershop has an online game for visitors to their site to play. The game is called Merry Xmas from Santa's Robot Helpers. The eponymous robot helpers are Daleks, and fairly accurately rendered ones at that - with the addition of a jetpack for the player's character, a red Dalek.
The simplistic game involves moving the red Dalek across a landscape, picking up gift-wrapped boxes along the way, and then blasting fifteen brown Daleks to end the game and deliver the gifts to Santa Claus.
The Christmas theme suggests that the game hasn't just been added to the site but has probably been there for at least a month. Here's a screenshot from the game: 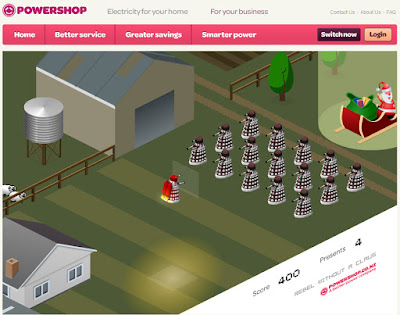 (Thanks to Jon Preddle for pointing out the game)
Posted by Paul Scoones at 1:08 pm 4 comments: