I'm delighted to offer a set of sample pages from The Comic Strip Companion: The Unofficial and Unauthorised Guide to Doctor Who in Comics: 1964–1979.

As someone who often buys books online, I'm a great believer in the value of offering a preview of the contents and I've frequently decided to purchase on the strength of reading sample pages.

The PDF sampler is downloadable from the link below. It includes the contents pages, the first story entry, and one of the 'interlude' articles.

This should provide a taste of what the book's about and how I've approached writing about the comic strips.

Thank you to David J Howe at Telos Publishing Ltd for arranging the sample.
Posted by Paul Scoones at 10:21 pm 2 comments:

The plan was that The Comic Strip Companion would only be available in paperback but, when it was first made available to pre-order in June this year, a number of fans expressed their preference for a hardback version. Telos do not always produce hardback editions for their titles but, in response to popular demand, one is now being produced for my book.

The limited hardback edition (I'm told that over half the allocation has already been pre-ordered), features a different cover design to the paperback version. David J Howe at Telos wanted something special for the cover so sought out an artist who worked on the original comic strips to create a new painting especially for the book. I'm simply delighted that Bill Mevin has painted the cover.

Bill Mevin's association with Doctor Who comics dates back to the mid-1960s. He was the second artist to work on the the Doctor Who strip in TV Comic, over a six-month period from October 1965 through to April 1966, and was the first to illustrate each of the strip's weekly instalments as full colour paintings (his predecessor, Neville Main, had drawn the weekly strip in black and white). Mevin's cover painting features William Hartnell's Doctor, which is appropriate as his Doctor was current at the time that Mevin was working on the strip. 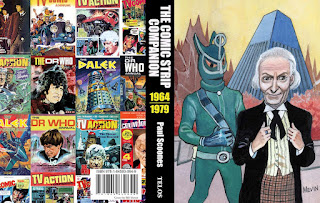 Both editions of the book are 608 pages (yes, considerably longer than as originally advertised!) with an eight-pages in colour displaying a number of the comic covers from the 1960s and 1970s.

The book was sent off to the printers yesterday. Now there's a wait of around six weeks until it is due to be released at the end of September. Oh the anticipation!
Posted by Paul Scoones at 10:16 pm No comments: