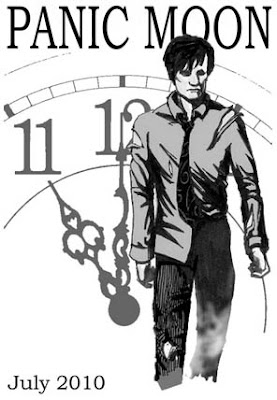 I'm intrigued by the current revival of Doctor Who fanzines. Why this is happening now and not five years ago when the series first returned to our screens is a bit of a mystery to me. Perhaps the new generation of Who fandom is only now discovering the medium in force. I thought perhaps paper-based fanzines were becoming a thing of the past, but it seems I was wrong.

After reading some favourable comments online, I ordered one of the new crop of fanzines, the UK-based Panic Moon, produced by Oliver Wake. I like the title which is both both cryptic and yet has currency for those in the know (An anagram of companion, it is the cover-name used for auditions for the role of Amy Pond).

Panic Moon is a small, conveniently pocket-sized A6 publication, and runs to 28 pages with a fairly small font size so that there is actually surprisingly a fair bit to read.

Most of the issue is filled with individual reviews of each of the Matt Smith stories. All too often fan critics seem to feel the need to accentuate the negative, so it is are refreshing to see that the reviews, from a number of different writers, are fairly balanced in their critiques. Interspersed with these reviews are short features on controversial topics including Amy Pond's character, the redesigned Daleks, and Chris Chibnall's writing.

Although almost all of the issue is taken up with coverage of the Matt Smith series, there is room at the end for commentary on a few other recent fanzines and the latest crop of Big Finish releases. The introduction explains that this emphasis on the new series is simply because it is topical and that the next issue will have "more old series stuff".

The artwork, all in black and white, is of a high standard and is used sparingly throughout the issue, nicely complementing the writing. The layout is pleasingly straightforward and unfussy.

I like this fanzine, and have no hesitation in recommending it.

Panic Moon is available to order worldwide, via payapal. Details can be found at:
http://panicmoonfanzine.angelfire.com/home/
Posted by Paul Scoones at 2:29 pm No comments: