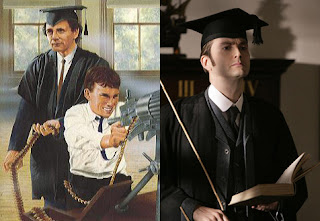 Meanwhile I am really, really looking forward to next week's episode!
Posted by Paul at 11:54 am 1 comment:

TSV 46 was - in magazine marketing parlance- a 'new look issue'. The logo was redrawn from scratch by Alistair Hughes (at first glance it might appear unchanged, but look closer to see the improvements). Nicholas Withers created the entire issue on computer, with only the artwork needing to be pasted up after the pages came off his printer. This revolutionised the whole process of designing and assembling TSV - no longer did it take at least a week to put it all together column by column using a glue stick and lightbox; now it was computer composited and could be transformed from a bunch of Word documents into a finished publication in the space of a day spent at Nick's place. I wasn't very computer-savvy at the time, but I gradually learned how to use the then very new Microsoft Publisher 95 by watching over Nick's shoulder as he worked his magic.

The issue was meant to have been out in mid-December 1995, and the Christmas-themed A Seasonal Tale story would have therefore fitted the festive feel rather well.

There were as I recall a number of reasons for that month-long delay between when the issue should have been out and when it finally appeared. Nick had his his end of year exams to focus on, and I was experiencing my first Christmas in frontline shop floor retail in the Queen Street branch of Whitcoulls, one of the busiest stores in Queen Street.

In addition, a major review of the new Time and the Rani video failed to arrive. By the time the writer (who should perhaps remain nameless), passed the last of many deadline extensions, Nick and I had the whole of the rest of the issue all ready to go and there was no time left to review the story ourselves or ask anyone else to do it, and three blank pages to fill. I did however have a fair bit of Time and the Rani artwork that had been submitted to accompany the review - including three different artists' Tetrap head-and-shoulders portraits - so the pages were hastily filled with reprints of the reviews published in TSV issue 5. I didn't like resorting to reprinting old material like this, but I made an exception on this ocasion out of necessity.

The main feature was a long-promised follow-up interview with Andrew Cartmel about his books and comics. My ex-wife, Felicity, had by this time moved to the UK and collaborated with David Bishop on this feature. Prior to this interview Felicity had had submitted a proposal for a Missing Adventures novel to Virgin, and her interest in the process of writing a Doctor Who novel is evident from her line of questioning.

The comic strip, Monkeyhouse, was an impressive 14-page effort by Peter Adamson and Paul Potiki, primarily featuring the Third Doctor and Jo, but with a guest appearance by another Doctor and companion. The comic strip stories became a fairly regular fixture in TSV around this time, thanks mainly to the drive and enthusiasm of Peter Adamson, who gathered a small team of reliable contributors around him to work on these strips.

1996 had arrived and half a world away in Vancouver, Doctor Who was about to make a comeback...