How I learned to stop worrying and love Doctor Who

Last night we watched The Runaway Bride with a group of friends. No - not that awful Julia Roberts movie, but the brand new Christmas episode of Doctor Who.

I always feel a sense of trepidation and nervous tension when watching a new Doctor Who story for the first time. This doesn't happen with anything else I watch. I’m working my way through the latest episodes of Heroes and Battlestar Galactica at the moment and although they’re both great series, I'm able to relax and enjoy them with no effort.

It's the acute awareness I think that a Doctor Who story's events and revelations need to be absorbed into the series' continuity; what fans sometimes refer to rather ostentatiously as the "canon". Every scene, every line will be picked apart and analysed in great detail in books, magazines and websites ad infinitum. There are books (such as the rather brilliant About Time series) still being published now which take a fresh look at the minutiae of the continuity dating back over 43 years, so you just know that whatever crops up in a brand new episode will be scrutinised for a long time to come.

However there’s a persuasive counter-argument for not doing this, at least on a first time viewing – but rather instead just enjoying the story as a piece of escapist entertainment. Don’t look for the bits that contradict something that happened in an episode that screened thirty years ago. Relax and just enjoy. Sometimes easier said than done.

Many years ago I assisted my good friend Jon Preddle with research for his book Timelink (previously issued by TSV Books and soon to be professionally published by Telos in the UK). Timelink is an awesomely detailed chronology of the Doctor Who TV universe, picking up on the tiniest details presented on-screen to form a theory of a cohesive, single continuity for the series’ entire run. It’s a bit like trying to piece together a vast, incomplete jigsaw and only managing to get some of the pieces to fit by filing down the edges. My task was to watch through the entire set of Jon Pertwee stories making notes on the continuity. Some of my notes were subsequently published in issues of TSV (here, here and here). I was particularly delighted to pinpoint the dating of The Time Monster thanks to an obscure one-line reference. This all took place a few years before The Discontinuity Guide (which took a similar approach to documenting series continuity) appeared; and indeed TSV was acknowledged as a source in that book.

However, having gone through this period of intense scrutiny of Doctor Who, I then found the habit rather hard to break. For a long time I found it difficult to simply watch an episode without mentally checking for references to times, dates and other minor details and how these might link into other stories.

Over the last couple of years watching new episodes of Doctor Who I’ve made a conscious effort to try to be less analytical, at least on a first viewing. I want to get back to a point where I can just enjoy the story without worrying about how The End of the World fits in with The Ark, or what it would take for The Christmas Invasion to exist in the same universe as The Ambassadors of Death.

I think with The Runaway Bride I’ve finally succeeded; last night when watching the story for the first time I managed to sit back, relax and just enjoy the story. I only had one brief slip-up when I caught myself wondering why the hole through to the centre of the Earth hadn’t caused its destruction or indeed yielded any Stahlman’s Gas!!
Posted by Paul Scoones at 2:16 pm 4 comments: 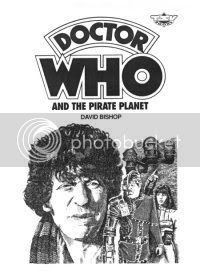 Doctor Who and the Pirate Planet, a novelisation written by David Bishop, is now available online as an ebook.

This adaptation of a television serial by Douglas Adams was one of a handful of Doctor Who TV stories never published by Target Books (I'm talking about the 1963-1989 run here). The omission of The Pirate Planet was particularly irksome to avid Target collectors - and I count myself as one - as it formed part of the six story Key to Time sequence. I still recall as a young and uninformed fan staring at the back of The Armageddon Factor novelisation and wondering why there were only five, not six, books listed in the Key to Time sequence.

The novelisation was first published in 1990 by the New Zealand Doctor who Fan Club. The author was David Bishop, an unknown name in fandom at the time, but now well-known as the author of several Doctor Who novels and Big Finish audios. Seventeen years ago this month, David was hard at work writing the first draft of this book.

I revised and expanded the novelisation for a new edition in 2001, with David's approval, incorporating a large number of sequences from the rehearsal scripts that had been cut from the televised story. For the new ebook edition, I dug out the notes I made in 2001 and attempted to document the changes for a editors' commentary.

After struggling through a few chapters, trying to convert numerous notes into readable prose, I decided that a far simpler solution was to present the deleted scenes from the rehearsal scripts as extracts from the novelisation and leave it at that. This proved to be a fairly straight-forward task, but to my surprise I discovered that I'd omitted a few of those scenes from the 2001 edition, so these segments appear for the first time ever in this ebook.

The ebook is also available as a downloadable PDF file and is accompanied by several 'special features', including an article about the book's publication history, a guide to the 'deleted scenes', a gallery of cover artwork, and David Bishop's notes from the original edition.
Posted by Paul Scoones at 12:09 pm No comments: