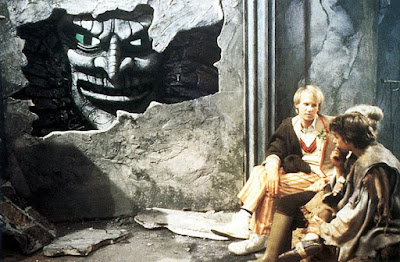 I began writing production text for the BBC / 2|entertain Doctor Who DVD range two and a half years ago. Quite early on I think it must have become apparent to my commissioning editor that I have an particular affinity for the Fifth Doctor's era, because I soon found myself the go-to guy for stories from Peter Davison's third and final year. (Thankfully Warriors of the Deep was already out on DVD, as that's one story I don't regard with much enthusiasm.)

Thanks to 2|entertain deciding that they needed to commission brand new production text for special editions of two previously-released stories, I've been responsible for a straight run of five consecutive stories: The Awakening, Frontios, Resurrection of the Daleks, Planet of Fire and The Caves of Androzani. That's 18 episodes in total, or 7 hours, 23 minutes of viewing time. I no longer have to be cryptic about any of those titles as 2|entertain has revealed the 2011 schedule in the latest issue of Doctor Who Magazine. All of the as-yet unreleased stories I've worked on are on that list. I've known for a couple of years that I was due to cover all five stories and I've gradually been working to complete that set. As of today I'm feeling a sense of accomplishment: I've just delivered the production text subtitles for The Awakening, which completes that set.

Every time I tackle one of these subtitle scripts it seems to eat up a large chunk of my life. I can't vouch for my fellow writers but it seems to take me a good couple of months to complete a four-part story, from beginning the research to finishing the scripts. Even when I'm not actually at my desk, working away on the project, it still occupies my thoughts. I always experience the mental equivalent of a great weight lifting from my shoulders when I put the finishing touches on a script and email it off to my editor on the far side of the world.

There is not much time to take a breather this time around. While I've been working away at The Awakening, other tasks have been mounting up. I've an article I've promised to write for one publication, an interview I need to edit for another, and there is also the matter of my book, which I need to get back to revising very soon.

For a long time I thought The Awakening would be my last subtitling job. It is the final Peter Davison story scheduled for DVD release, so that is 'my' era effectively done and dusted. But it now seems that my days of writing production text are not quite over yet. Mid-way though writing this latest set of subtitles, I was offered another commission. It's a completely different era of the series, of course, but I'm not about to pass up more work. So before too long I'll be immersing myself in the minutiae of another Doctor Who story. Maybe this one will be my last? Who knows!

Oh, and if you think the title of this post is a dreadful pun, wait until you see how The Awakening was going to end before the final scene was rewritten!
Posted by Paul Scoones at 10:43 pm No comments: