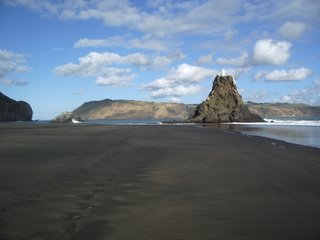 Whatipu is a wild and remote surf beach located at the southern end of Auckland's Waitakere Ranges. Accessible via a narrow gravel road which winds down through a mountainous bush-clad valley, the beach and its surrounds are a vast undeveloped scenic reserve with a few scattered camping grounds.

When I was a teenager my family lived in the Waitakere Ranges and trips out to the neighbouring west coast beaches seemed reasonably frequent. Of all the spectacular, wild beaches including Karekare, Bethells and Piha, it was Whatipu that always appealed to me the most. It is so vast and devoid of civilisation that it seemed like the perfect location for a fantasy/sci-fi series (though I'm sure the poor road access would be a deterent to a large film crew). Later of course, such series as Hercules and Xena were filmed on location on the west coast beaches.

In the late 19th and early 20th century the Waitakere Ranges was stripped of its Kauri trees. Kauri is now in short supply, but at the time it was a common timber. The logs were transported down the West Coast by a tramway line built on trestles above the sand, mainly hugging the cliffs down the length of each of the beaches before a wide arc across the open sand at Whatipu saw the line terminate at a wharf where the timber was loaded on to ships. The tramway's long since gone - more's the pity because it would make an awesome tourist attraction, but if you know where and what to look for, you can still see rusting lengths of track and railway sleepers poking out of the sand. Apparently the steam engine used to haul the timber is buried whole beneath one of the sand dunes, but no one's ever been able to locate it.

Whatipu is also famous for its caves, the largest of which was once used as a dance hall for the locals, complete with a wooden dance floor now buried under several metres of sand. In early 1986 - my final year in school - our entire class hiked out to Whatipu and camped in the cave. Soon after we left school a number of us made a return visit to the cave. There was some talk of holding a class reunion picnic or camp there at a later date, but nothing came of this to the best of my knowledge.

On Saturday, fifteen years after I last visited Whatipu, we drove out there. I wanted to show Rochelle this most desolate and isolated of Auckland's beaches. She sells many maps of this area in her store but had never before visited Whatipu.

The memory I had of the place was at odds with the present day reality. I recalled a vast stretch of rolling sand dunes between the beach and the cliffs but nature has transformed these dunes into scrubland and marshes. There's even a lake inhabited by swans, nestled somewhat incongruously between the dunes. 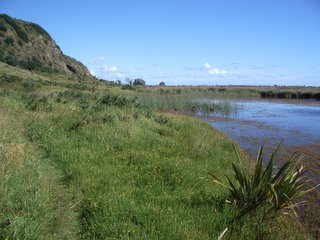 The cave was much as I remembered it, but with the addition of a designated (yet deserted) camp site area a short distance away and a sign outside the entrance warning of falling rocks. Sure enough, the sandy cave floor where myself and thirty or so of my classmates had once slumbered snug in our sleeping bags was now littered with rocks, some the size of footballs, that had fallen from the roof of the cave. I was suddenly wary of spending any length of time in that cave. It no longer seemed like the safe, inviting place it had seemed to be when I was a Seventh Former. Had we unwittingly put our lives at risk by camping in that cave? Had the cave roof perhaps become unstable in the intervening years? Or was it simply that in those young and reckless days that danger was all part of the thrill of doing something a bit daring and adventurous...? 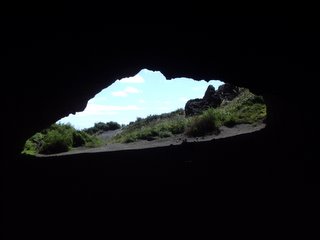 I lingered just long enough in that cave to take a photo, and for the 20-year-old memories of that fondly-remembered school camp to come flooding back before beating a hasty retreat to the safety of the welcoming sunshine outside.