Keri Hulme and The Bone People 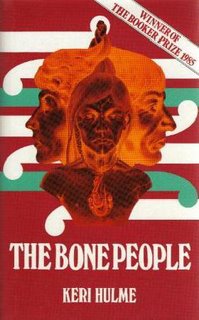 The Bone People, by Keri Hulme, is a New Zealand novel that won the 1985 Booker Prize. The book is set in a remote area of the South Island and broadly is about the relationships between a reclusive woman Kerewin Holmes (believed by many commentators to be largely based on Hulme herself), a boy called Simon and the man who looks after him, Joe. It's a fairly long book, full of evocative descriptions of the environment and involves a lot of Maori culture. It's the only full length novel Keri Hulme has written.

I studied The Bone People for a New Zealand English Literature paper at Auckland University in 1989. The paper gave students some flexibility; it wasn't necessary to write about every book on the reading list, you could disregard a few. I remember making my selection according to which titles I could obtain cheaply (being a typically broke student), and I was able to pick up The Bone People for a good price in the Students Association secondhand book sale. I carried this dauntingly thick, slightly battered red covered paperback around in my bag for a few weeks before I sat down in the library one morning and turned to page 1.

Hours later, I emerged from the library having read the 450-page book from cover to cover without a break. Not because I had to read it that fast but because it was just so engrossing that I could stop reading. It's a cliche to say so, but this really was one of those rare novels that was simply unputdownable. I felt like I'd become to know and understand each of the characters in the book personally and I realised exactly why that novel was thoroughly deserving of the Booker Prize.

I wrote about The Bone People in my final exam and got good marks for that paper. More than sixteen years later I can't recall what any of the other books were I had to read for that English paper, but I recall The Bone People. The memory of reading that book over one day has stayed with me long long after many other incidents from my time at university have faded from my mind.

So it came as a bit of a jolt when someone called Keri Hulme sent an email to the TSV website feedback address late last year, offering advice on a Maori name included in this this article. Was this the Keri Hulme? I emailed back, thanking her for the feedback (which we added to the site), and also as an aside asked if she was the same Keri Hulme who was the author of The Bone People. I tried to explain a little bit about how much I'd been impressed by her novel. Feeling a wee bit foolish in case this just happened to be someone else with the same name, I clicked send.

A couple of weeks passed and I thought nothing of this. I wasn't expecting a reply, but when I checked my inbox when I got home this evening, there was a reply from Keri Hulme. The Keri Hulme. Keri wrote that she appreciated my comments about her novel very much, and told me that she appreciates "good sci fi" and likes the TSV website.

A Booker Prize winning author reads the TSV website. I'm still getting my head around that fact. Even writing it down seems wrong somehow. It's one thing to have Colin Baker recive issues of your magazine (which indeed he does, and by his own account enjoys reading them), but this is something else. When TSV gets noticed and appreciated by someone with such outstanding literary credentials who is well and truly outside of the usual Doctor Who circles, that is truly extraordinary and rather humbling.
Posted by Paul Scoones at 8:22 pm