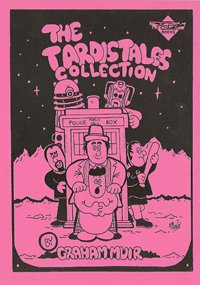 The ongoing project to publish as much as possible of the TSV back catalogue online continues. The most recent issue added to the archive is a spin-off special from May 1993: The TARDIS Tales Collection. This was a 72-page issue that collected together all of the TARDIS Tales comic strips from TSV that had been published up to that time, plus some material that was exclusive to the collection.

TARDIS Tales was written and drawn by Graham Muir, a talented fan who hails from Ashburton. Over the years the comic strips gained an international following amongst TSV readers. Graham's quirky, self-deprecating humour and bold black and white drawings were a popular feature of each issue and over time Saucer the insolent, aggressive talking chicken, introduced in one of the early instalments, became synonymous with the strip. The Doctor himself was sidelined as a supporting character and usually ridiculed, but no-one seemed to mind.

"All of Graham Muir's witty cartoons from Time/Space Visualiser collected into one volume. To give an example of the humour, in The UNIT Reunion, the Brigadier has a fatal heart attack when the Doctor introduces him to his new companion, Saucer Smith from the planet Poultro who is in fact a talking rooster. Good for a giggle."
Posted by Paul Scoones at 6:54 pm