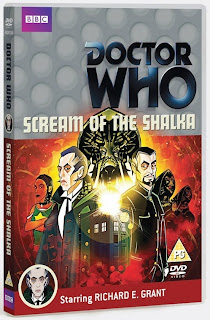 Doctor Who: Scream of the Shalka arrives on DVD this month, with subtitle production notes written by myself.

I was commissioned to write the production notes (this is my eighth set of subtitles for the DVD range) in early October last year. With the 'classic' Doctor Who DVDs winding down, as there are now only a few titles as yet unreleased, I was doubtful that there would be any more work on the range coming my way. Many months had passed since I delivered my previous set (for the Vengeance on Varos Special Edition), so the offer to work on another story came as a welcome surprise.

I was delighted to be offered Scream of the Shalka in particular because it is uniquely set, in small part, in my home country of New Zealand. I was therefore well-positioned to explain the 'location' used and also had the irresistible opportunity to correct an actor’s painful mispronunciation of a familiar place-name. The New Zealand connection was however coincidental. I was asked to tackle this story for a different reason, but one that had something to do with my geographical location.

Researching a set of DVD production notes involves combing through the production files held at the BBC’s Written Archives Centre. This, combined with a close analysis of the scripts, forms the bulk of the subtitle material. The problem for me is that I'm on the far side of the world so it is impractical to pop over to the UK each time I get a commission. Instead I’m usually dependent on someone helpfully undertaking the time-consuming task of photographing or scanning the files for me.

I was assigned Scream of the Shalka because it was expedient to do so. Written Archives do not hold any production documents or scripts for the story. This is either because the production is too recent (relatively speaking) to have been released to the Archives or perhaps because it was a webcast, not a television drama production. The important thing is that there was nothing on file that needed to be accessed and copied for me. (See Addendum below).

While I wasn't about to pass up the commission, this singular lack of documentation did give me some initial concern. I was worried at the prospect of having to come up with a set of subtitles without any of the usual invaluable documentation to fall back on. I didn’t even have any scripts.

I emailed Paul Cornell, the writer of Scream of the Shalka, asking if he might have a copy of the script or indeed any other material he could let me see. Fortunately Paul had retained all of his work related to the story on his computer, and very generously sent me everything he had.

When I saw just how much material Paul had attached to his email, I felt a weight lift from my shoulders. He'd provided various versions of the scripts, outlines, character notes, email correspondence, sequel proposals and more. Reading through these documents, I stopped worrying that I had far too little to write about and instead started wondering how I could possibly begin to fit all of this detail into the production notes' running time.

The one condition Paul stipulated of me was that I let him see and approve my subtitle scripts before I submitted them. Paul sent me everything he had so was concerned in case I included something he considered too sensitive for publication. I'm happy to say that when I sent Paul my finished subtitles for approval the only change he requested was to correct a single spelling error.

Scream of the Shalka was developed over three story outlines and five script drafts. Charting the evolution of the story through these versions proved to be a daunting and yet fascinating exercise. Sequences were added or replaced, names and locations were changed, and many of the details regarding the Shalka themselves were altered. I have included as much of this detail in the subtitles as I could.

The New Zealand content in Scream of the Shalka was inspired by Paul Cornell's experiences while travelling around the country on holiday in early 2003. He and his wife Caroline stayed at my house for a few days during their trip and on one occasion Paul used my computer to get on with his writing while my wife Rochelle and I took Caroline out for the day. (I should note though that I was not aware of what Paul was writing at the time. He was careful not disclose anything to me about this as-yet unannounced project during his stay in New Zealand.) I think it is somehow quite fitting that I wrote the subtitles at the same desk and in the same room where Paul had been writing almost exactly a decade earlier.

During my research I discovered that I had another connection to the story. In the final version, the two men who appear in the opening sequence set on the slopes of New Zealand’s Mount Ruapehu are McGrath (in the suit and sunglasses) and Dawson (in the floral shirt).  However in the earliest script drafts the two were respectively ‘Jon Preddle’ and ‘Paul Scoones’. Paul Cornell never let on about this, so for ten years I was unaware that he had intended to name two of the story’s characters after myself and my friend Jon. It was an odd experience to write about myself in the subtitles!

I also received some invaluable assistance from James Goss. James was one of the story’s three executive producers and developed the making-of feature for the DVD. It was extremely useful to compare notes as we were both researching the story. As James observes in the current issue of Doctor Who Magazine (see the DVD preview in #464), there were even times when I corrected him about things he’d mis-remembered.

The production notes for Scream of the Shalka may end up being my final work for the DVD range. I hope not, but if that proves to be the case it is fitting that I bow out with a story that has such personal significance.

Scream of the Shalka is released on DVD on 16 September 2013.

Addendum: Shortly after publishing the above article, I learned from a colleague that files for Scream of the Shalka are in fact held in the BBC Written Archive. This documentation, which was previously believed to be unavailable, is not held with the normal Doctor Who files but instead filed in an separate area. Despite this belated discovery it is unlikely that there is much that it would have added to the production notes subtitles. Paul Cornell's comprehensive files, supplemented by James Goss and others, provided an exceptional level of detail about the development and production of the story, most likely duplicating a lot of what is held in the BBC Written Archive.
Posted by Paul Scoones at 9:29 pm