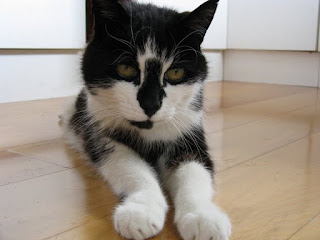 Chester died today. He had been our faithful companion for thirteen years. He was a very old cat; we believe he was five when we got him, which made him 18 when he died.

Rochelle found Chester in the North Shore Times newspaper back in 1995. He was free to a good home, unwanted by the neighbours of a family who’d gone to Australia for a holiday and had evidently liked it so much they’d decided not to return. Deserted by his owners, Chester apparently decided to move in next door, imposing himself on the neighbours who’d been feeding him in his owners’ absence. They had cats of their own who became very distressed at this newcomer’s unwelcome presence. In desperation the neighbour took Chester to the vet to be put down. The vet - seeing a healthy well-fed cat in the prime of his life – persuaded the neighbour instead to place an advertisement in the paper. Which is where we came in.

We had recently had a bad experience with a rescue cat, a stray we named Max. Max had previously lived in a supermarket car park, and was clearly unwilling to settle into the pampered life of a household cat. We made a valiant effort to domesticate Max, but he escaped through an accidentally open window one day.

Chester was Max’s replacement, and Rochelle knew it was meant to be as soon as they met. She went round to view him and Chester immediately began rubbing all around her ankles. His immediate and unconditional affection was a stunning contrast to Max’s complete absence of people skills. We didn’t name Chester – that was the name given to him by his previous owners who’d scarpered across the Tasman.

So Chester came to live with us in our small Glenfield flat. We lived at the time in a converted motel unit complex, and our gregarious tuxedo cat was soon the talk of all the residents in the units, schmoozing his way into the affections of the generally middle-aged single women who were our neighbours. He sometimes could be found befriending patrons at the Georgie Pie restaurant that backed on to the flats. He also accompanied us on walks several block distant, and could even be persuaded (when placed at the top) to try the slides at the local park playground.

When we moved to our house in Takapuna Chester adapted rather quickly to this new unfamiliar territory and once again ingratiated himself with the local residents. He became rather overweight for a while due, we suspect, to snacks he received from doting neighbours. He became firm friends with our neighbours’ cat, Sammy. The two of them were often seen exploring together, until Sammy died of old age a few years later. Chester then befriended another neighbour’s small tabby kitten, called Trigger, and almost seemed as if he was mentoring a young apprentice.

Rochelle and I got into the habit of going for short walks in the evenings and weekends, with Chester and Trigger accompanying us as far as they felt comfortable doing so. Chester once walked with us all the way to the roast meal shop located two blocks away. It was probably the wafting smells of gravy that lured him on – gravy was a favourite food. We’d give him cat food with chunks of meat in gravy and he’d methodically lap up every drop of gravy and leave behind the meat.

Chester was affectionate and energetic for a long time, but as old age crept up on him he became gradually more distant and took to sleeping almost all day. His favourite spots were clumps of long grass beside our driveway and also the sun loungers on our deck where, on warm sunny days, he liked nothing better than to soak up the rays until his black fur was almost too hot to touch.

Chester was a costly cat, too. He was fussy about his food and had the uncanny ability to discriminate between cat food brands based on price. He also lined the vet’s pockets on many occasions.

He suffered a scrape to his right eye which necessitated an operation which involved peeling off the outer layer of the eye and then stitching the eye closed whilst the layer regrew. Despite suffering a week of indignity going around with one eye stitched shut, Chester’s eye never entirely healed up and he always had a slightly milky glaze over his right eye after that. He also had to have several teeth removed at various time, including two of his four incisors which caused him to thereafter always eat with his head cocked on one side.

In the last couple of years, he developed a problem with one of his back legs becoming stiff and unresponsive. The vet diagnosed this as a pinched nerve in Chester’s spine, but due to his age, they were unable to safely operate to fix the problem. Chester would sometimes have rather alarming spasms in his defective leg, which he’d find upsetting as he’d growl and bite down on his leg until the spasms subsided. It was unwise to be in his vicinity when this occurred, as Rochelle found out to her cost not once but twice, when Chester confused her arm with his leg. The bites became seriously infected and required medical treatment. To this day she bears small bite scars as permanent reminder of Chester.

Three and a half years ago, facing Chester’s declining health we decided to get a second cat, another tuxedo male we called Monty who had just been weaned from his mother and seemed to latch on to Chester as a bit of a role model. Chester was having none of it though and growled and spit at this tiny impressionable kitten whenever he ventured too close. Perhaps Chester cannily realised that Monty was being groomed as his eventual replacement. Fortunately for us, Monty quickly befriended the aforementioned Trigger, who was much closer to his own age, and the two were firm buddies, with Chester accepted as part of the group. The trio would usually accompany us on our regular walks, which stopped after Trigger sadly died after being hit by a car, and due to his bad leg Chester became too immobile for him to walk very far.

We had hoped of course that Chester would go quietly in his sleep. We’d last taken him for his annual vet check-up in February this year, fearing the worst, but the verdict was that for his age he was in remarkably good health and still had life left in him. We took a trip to the UK in May this year, leaving instructions with our neighbour for what to do if Chester passed away. He looked so frail that we really didn’t think he had many days left. To our amazement and relief, Chester was still around when we returned after five weeks away, regarding us as usual with a disapproving glare that said, “And where do you think you’ve been…?”

In the few weeks since our return, Chester’s health took a turn for the worse, perhaps exacerbated by a bad patch of cold, damp weather. In the end though, like many old cats, it was his kidneys that got him. He went off his food and had even stopped drinking water. We were concerned for his health and tried to keep him inside and as warm and comfortable as possible. Midday yesterday Chester went outside. I went searching for him but couldn’t locate him before we were due to go out that afternoon. As I drove away, I thought I saw him sitting over in the neighbour’s garden, oddly enough in the same spot where Trigger had been buried.

In the evening we returned home and learned that our neighbour had found Chester collapsed on his doorstep, howling and soaking wet from the heavy rain and in our absence had very kindly rushed him to the vet. Chester was fed and rehydrated, but in the end there was nothing the vet could do for him; his kidneys were found to be inflamed and riddled with cancer and we made the heartbreaking yet inevitable decision to have him put to sleep. He died in Rochelle’s arms mid-morning on Sunday 29 June 2008.

Chester was very old in cat years. He’d had a good life and had been well loved by both of us. I like to write on my computer late into the night, and Chester would often curl up at my feet. As I’m writing now, I’m missing his familiar presence. The memory of Chester - the cat with a huge personality - will forever remain. 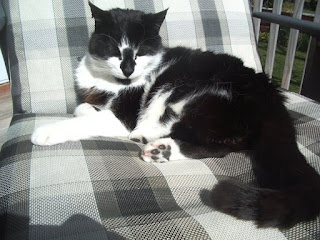 So sorry to hear the news of Chester's passing. I have many fond memories of the Chesterooney and I'll miss the boy tremendously.

So a toast to old Rooney - a very splendid cat indeed!