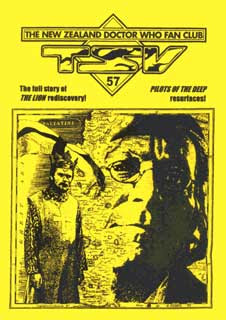 Every issue of TSV that I've edited has had one or two leading features that define that issue's unique identity. Whether it be an interview, an analysis of some aspect of the series, a comic strip story or a particularly in-depth review, this item (or items) is the very heart of the issue. In the case of TSV 57 that core item is The Lion’s Tale, an extensive expose of the rediscovery of the rediscovery of The Crusade episode 1.

While I usually chose to leave the writing of such lead items to others so that I’d have enough time up my sleeve to actually put the issue together, in the case of this article there was no one better positioned to write the piece than myself. The fact that I was effectively doing double duty as both lead writer and editor goes a long way towards explaining why there’s a fairly long delay – half a year in fact - between issues 56 and 57.

The discovery of a lost Doctor Who episode in New Zealand generated a huge amount of interest at the time, and to this day many people I meet (fans and non-fans alike) recall the news of the find and appear genuinely interested in having me talk about my part in the episode’s discovery and return. At the time of writing (in early June 2008) I’ve just returned from a month-long trip to the UK during which I met a few fairly well-known people in Doctor Who circles, and sure enough The Lion continues to come up as a topic of conversation more than nine years later (I even got to visit BBC Television Centre on this trip and met people who were responsible for the episode’s restoration and saw the machine on which the film print was copied). A number of the people I’ve worked and socialised with recall reading or hearing about the episode discovery. It’s not something I usually volunteer myself but when I mention that I am a Doctor Who fan (something that’s rather more socially acceptable to admit to these days, to my delight), a typical response from a non-fan in New Zealand is to observe that an episode was once discovered here. At which point I confess my own involvement in that, and usually end up telling a potted version of what happened.

The full version of The Lion’s Tale appeared in TSV 57, and was subsequently republished online in a slightly altered version. This was one of the earliest items to make the transition from print to the online medium, and perhaps even pre-dates the creation of the TSV Archive. As such it means that the heart of TSV 57 has been available to read on the website for a lot longer than the rest of the issue. The article was revised early last year (2007) with the assistance of Jon Preddle, mainly to incorporate information that has since come to light about why the episode was found in New Zealand despite never actually having been screened on television in this country. The online version still resembles the original printed piece, and the one notable omission is a plot synopsis of the episode, which was borrowed from Andrew Pixley’s archive feature in Doctor Who Magazine. Despite fully intending to do so, I neglected to ask permission from either Andrew or DWM to reprint this section in TSV. Which was rather embarrassing; especially when Andrew told me that he’d prefer that I hadn’t reprinted the excerpt. Fortunately Andrew was very good about the whole thing, and the archive synopsis was left out when the article went online.

If The Lion’s Tale was the heart of TSV 57 then its soul was The Life and Times of Neil Lambess. Neil frequently mentioned to me how much he loved the Jackie Jenkins column in DWM. The Life and Times of Jackie Jenkins was a regular column about events in the life of a female Doctor Who fan. Jackie was a fiction, penned by DWM columnist Vanessa Bishop, but many of the things she wrote about had a truth that resonated with fans. Neil was particularly awed by the fact that in one instalment ‘Jackie’ talked about the return of The Lion, meaning that his key role in discovering the episode had influenced Jackie’s semi-fictional existence. I suggested to Neil that he ought to write up his own experiences surrounding The Lion in the form of a pastiche of Jackie’s column. Neil writes with a great deal of feeling and with his honest emotions very much on show, and I think that is what makes his work so compelling and so suited to this type of confessional piece. Although it was never intended to be anything more than a one-off, I was so taken with Neil’s article that I asked him to continue with a regular column, which in later issues Neil re-named Errant Nonsense.

The other key significant item in the issue was the Pilots of the Deep comic strip. This was a good fit with The Lion content in the sense that this was also about restoring a piece of lost Doctor Who narrative. Pilots of the Deep had for many years been an unfinished work, a loose dangling thread in the history of TSV. The initial two parts of the strip, which featured the Seventh Doctor and Ace encountering the Sea Devils, had appeared in 1989 but it was never completed. A decade later, the strip was reprinted with a newly-created conclusion as a collaboration between Peter Adamson and David Ronayne. It was particularly satisfying for me to see the story finally completed as I’d collaborated with Mark Roach (now a successful Auckland independent music producer) on the second instalment back in 1989. I met up with Mark late last year at a reunion of a group of old friends I hadn’t seen for years and he told me that he’d discovered the TSV website and appreciated getting to see his old Doctor Who writing and artwork again.

Finally, the stunning front cover artwork by the awesomely talented Alistair Hughes cannot pass without mention. The Doctor's face emerging from an old map of Palestine is quite astonishing to behold, and appears almost three-dimensional. Quite brilliant.