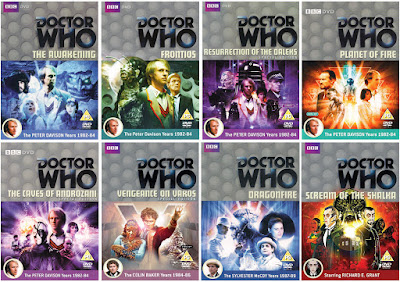 I was first approached about working on the DVDs on Thursday 6 March 2008 when I received an email from Martin Wiggins, who had just taken on overall editorial responsibility for the production subtitles on the Doctor Who DVD range. Martin asked if in principle I’d be interested in contributing production subtitles. My immediate thought was that he had emailed the wrong recipient, as I never imagined that I’d be asked. I lived in New Zealand and all the work for the DVD range was done by highly knowledgeable and skilled people whom, to the best of my knowledge, were all based in the UK.

I already knew Martin; he was a subscriber to my Doctor Who fanzine Time Space Visualiser (TSV), and we had corresponded occasionally. He was familiar with my work from reading articles that I had written for TSV. Most of my pieces focused on extensively-researched studies of specific aspects of the series production history such as, for example, an article about the making of the 30 Years in the TARDIS documentary which had received wider exposure when it was reprinted in the UK publication In-Vision. Martin thought I’d be suited to working on the production information subtitles and I later learned that I was one of just a handful of people approached by him for this work.

Martin’s approach came, quite coincidentally, shortly before I was made redundant from a job I’d held for six-and-a-half years. His offer, although in no way a replacement for full-time employment, nevertheless provided me with a lovely confidence boost and the prospect of further work just when I needed it most. I had also recently been commissioned by Telos Publishing to write The Comic Strip Companion. After twenty years as a fan writer, in the space of a few weeks I had landed not one but two professional writing commissions for Doctor Who!

Martin offered me Planet of Fire, for delivery in September of that year. I was thrilled as the story came from Peter Davison’s era, which has always been a personal favourite. I felt that the overseas location filming on the island of Lanzarote and the introduction of Nicola Bryant as Peri would provide an abundance of interesting behind-the-scenes details to discuss in the subtitles.

Embarrassingly, I wasn’t overly familiar with the production subtitles when I received the offer. I'd looked at some but by no means all of the DVDs. I collected the series but hadn’t found time to watch each of them all the way through. When I was offered the job I looked at the subtitles on a few of the latest DVDs to get a better understanding of what was involved. I was especially impressed with those written by Martin himself. I’m not just saying that because he was my commissioning editor! His work for Logopolis stood out in particular as a richly detailed set of production notes, and I regarded this as the standard to aspire to in my own work.

Martin was a great editor to work for, with a no-nonsense approach that I respect and appreciate. He would tell me quite directly when I got it right and when I got it wrong. If he wasn’t happy with a submitted set of subtitles he would perform a re-write and ask the writer to check over his revisions. It was therefore a great feeling to get back a set of edited subtitles for approval and see that his changes were superficial, indicating that he approved of what I'd done. In addition, if there was a sudden imposition of a seemingly impossibly tight deadline, which happened to me in a couple of instances, he negotiated on my behalf to ensure that I had a reasonable time frame in which to get the job done.

The brief included a directive to be as accurate and as precise as possible in documenting the background to the story. This entailed disregarding behind-the-scenes articles that had previously been written on the subject, and instead focusing the research on primary materials including the scripts and the usually fairly extensive production files for each story held by the BBC. This approach led to the discovery of new facts and ‘busted’ some long-standing myths.

All of the television stories I worked on were from the 1980s. Martin felt that I had a particularly affinity for 1980s Doctor Who which is why he offered me stories from this decade. I’m very fond of Peter Davison’s Doctor, so was delighted that I got to do a full quarter of the total number of stories from his era, comprising an unbroken run of five stories from The Awakening through to The Caves of Androzani, including two 'Special Editions' reissues. Once the Davison stories were all done Martin offered me stories from later eras, including the Colin Baker serial Vengeance on Varos (1985), the Sylvester McCoy story Dragonfire (1987), and lastly the Richard E Grant animated serial Scream of the Shalka from 2003.

In terms of research materials, I’m most interested in the scripts. The copies held by the BBC are usually transmission scripts and consequently closely follow what's presented in the broadcast episodes. I always tried to source other versions, including early drafts, rehearsal and camera scripts, all of which offer an invaluable insight into how the story changed both before and during production. These scripts often contain some fascinating deleted or significantly altered scenes. Fortunately scripts have been retained in private collections, and I’m very grateful to a number of people who very generously sent me copies.

I also sourced a great deal of information from the production files held in the BBC Written Archives Centre at Caversham in Reading. I believe that I was unique among the group of subtitle writers in that I do not live in the UK, so it was simply not possible for me to pop along to Caversham to take a look at the files, as my fellow subtitle writers did. I did visit once in 2008 when I was in the UK on holiday, but in most cases copies were made of the files and emailed to me.

The production files are a slightly haphazard collection of the internal memos, correspondence, actors’ contracts, budgets, props requirements, recording schedule, editing notes and other paraphernalia accumulated over the course of the making of the story. It can be rather random and muddled assortment of paperwork. It’s thrilling to come across paperwork containing important hitherto undiscovered gems such as for example a letter offering a familiar role to a different well-known actor, but it’s not all interesting stuff. One promisingly bulky file turned out to have loads of very dull vehicle requisition and mileage claim forms!

If the material has survived, I was provided with earlier edits of the story and other footage such as raw studio recordings and film footage from location work. These were not only a valuable source of deleted scenes - not all of which made it on to the finished DVD - but also offered further insight into how the story was made.

I also read as many interviews as I can find with relevant cast members and production personnel. Their recollections do not necessarily always tally with the paperwork, but the anecdotes help to shed light on certain aspects of the story.

My working process for each set of subtitles was to be initially guided by what is in the scripts. I run through the story, breaking it down scene-by scene and making notes on any differences, such as cut sequences, altered lines of dialogue, scenes appearing in a different order, different shots, changes of locale, all that sort of thing. In most instances I had more than one version of the scripts to compare, and the set of notes resulting from this script to screen comparison usually accounted for a substantial chunk of the subtitles.

Next I added notes pointing out effects, plot holes and production errors, and specific information about any location filming. The remaining gaps were filled with general information about the development of the story gleaned from the production files. It’s here that I would discuss such things as the commissioning process, the rewrites, the casting and the studio sessions.

The most difficult part of the process was when I found myself with a great deal of interesting information specific to one particular sequence and there was not enough time on screen to do cover it all. It could be very hard deciding what to cut out!

Some people read the subtitles while simultaneously listening to the audio commentary. I am firmly in favour of experiencing these two strands separately. Many of my subtitles are specific observations about lines of dialogue so to receive the full benefit viewers need to be listening along to the story, not the commentary.

Another observation I make about this is that the commentaries and subtitles sometimes contradict each other. When such contradictions arise, I regard the subtitles as the most accurate account. It comes down to a question of which is more likely to be correct: the paperwork and scripts from the time that the story was made, or the actors and production team members’ recollection of something they worked on decades earlier.

What makes the subtitles special is that they annotate each story on a line-by-line and shot-by-shot level of detail. The information is presented in an immediate fashion while the viewer is simultaneously experiencing what is being discussed. It is therefore possible for the subtitles to point out some quite obscure details as they happen. They are different from Doctor Who Magazine’s 'Archive' or 'Fact of Fiction' features. These cover some of the same ground but not in quite such an involved level. The Archives were written over a decade ago, and more information about the production of each story has since come to light. The subtitles, especially those for DVDs produced in recent years, were an opportunity to present these newly-discovered facts.

NOTE: The above article is adapted from an interview I gave to Nicholas Pegg for ‘Infomania!’, an article published in Doctor Who Magazine #449, 28 June 2012.

Follow the links below to see more about each of the stories I worked (listed in order of DVD release).
Planet of Fire
The Caves of Androzani
Resurrection of the Daleks
Frontios
The Awakening
Dragonfire
Vengeance on Varos
Scream of the Shalka

To collect DVD of different informative programs and movies is my hobby and i got informative date from here, thx for writing a informative post indeed. blade runner dvd collection