Countdown to The Comic Strip Companion 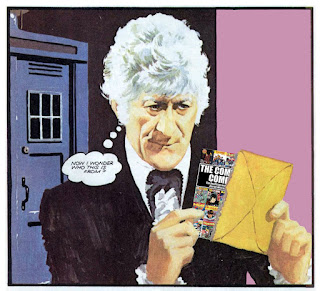 The Comic Strip Companion: The Unofficial and Unauthorised Guide to Doctor Who in Comics: 1964 - 1979 will be published later this year.

The expected release date of 30 September 2012 has recently been posted on the Telos Publishing website, along with the reveal of the cover and blurb. Judging by the comments posted online in reaction to this announcement, it appears that there are many readers eagerly awaiting the book’s publication. I count myself among them. I may have spent countless hundreds of hours researching, writing and revising over the past five years, and I’m very keen to see the finished product.
The Comic Strip Companion is a guide to an aspect of Doctor Who that may be unfamiliar to many fans, as all the comic strips published in the years covered by this book are long out of print. The book does not reprint the actual strips. For rights reasons this is not possible. The book does feature an 8-page colour section featuring a selection of relevant comic strip covers.

Each individual episode has a plot synopsis, so anyone who has not read some, or perhaps even all, of the comic strips under discussion should still find the book entirely accessible. It also provides a lot of information that even readers who do have the strips to hand will not have known about before, sourced from original correspondence, synopses, scripts and interviews with some of the writers and artists.

The fifteen year period covered in this book details every Doctor Who story, produced by Polystyle Publications (formerly TV Publications), that appeared in TV Comic, Countdown and TV Action.

The Doctor’s comic strip adventures began in November 1964; one year after the television series was first broadcast. For the following fifteen years, Doctor Who appeared in comic strip form almost every week, amassing many more individual stories than the television series. In May 1979 the strip was discontinued. After a five-month hiatus the strip was re-launched as a regular feature in Doctor Who Weekly (later Doctor Who Magazine, where the strip continues to this day). This break and subsequent change of publisher marks the conclusion of the book’s comic strip coverage. I am writing a follow-up volume that will pick up the story of the comic strips from October 1979 onwards.

Most of the book is taken up with a year-by-year, story-by-story coverage of the weekly strip, but there are sections included for the comic strip adventures in The Dr Who Annual, the Dalek books and annuals, and The Daleks, a weekly strip that appeared in TV Century 21. The book also has appendices that detail all of the reprints, adaptations, humorous strips and even a handful of associated text stories.

The book is an A5-format paperback, around 500 pages in length, and is now available to order from Telos. 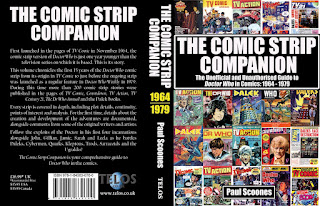