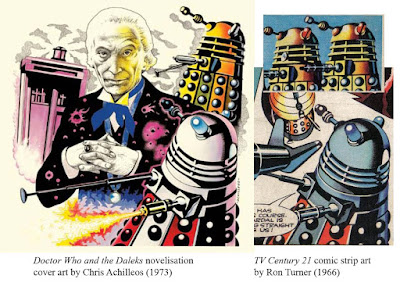 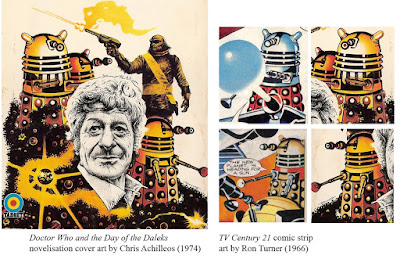 I've reversed the relevant sections of Achilleos's cover on the right for a direct comparison.
Posted by Paul Scoones at 1:12 pm

Telos' 'The Target Book' points out that Achilleos probably took inspiration for his Three Doctors cover from a Fantastic Four comic cover (issue 49), but I don't think it mentioned the Ron Turner connection. Nice spotting on Jon's part, but please tell him to stop so that I can read Volume 1 and you can write Volume 2!

Didn't Chris release a photo portfolio thingy... why hasn't Ron Turner gotten his share of the praise and $?

It looks like he's in the same boat as poor Ray Cusick. The daleks really are evil... they cause people to screw other people over.

He also slightly changed the designs for the first cover (primarily the gun arm).

Fascinating! :) I hope it was intended as homage.

I was going to mention the Three Doctors artwork too. That had me a bit disillusioned as it's one of my favoutite Target covers, but hey, it's still a great bit of work!

To be fair to Achilleos, I can't imagine he was given a great deal of reference photos to work with, not compared to later artists.

He's clearly a tracer, the lowest form of illustrator.

There's an incredibly strong Frank Bellamy influence as well. Bellamy was a contemporary of Turner (prefiguring him on the Dan Dare strip for the Eagle and working for TV21 at the same time as the Dalek strips appeared) and also supplied Doctor Who illustrations for the Radio Times, including the Day of the Daleks cover that must surely have been the template for the original Target range.

Thanks to Gary Gillatt on Twitter for flagging up this blog post. I love this sort of story, always fascinated by the history of comics, Target and so on. New facts! Very much looking forward to the books.

Thanks Anonymous! As for Achilleos being "inspired" by The Fantastic Four for his The Three Doctors cover, if you check out page 11 of DWM 362 you'll see that I was responsible for uncovering this secret as well, and also passed it on to Telos. Jon Preddle

The Police Box on Daleks always looked to me like it was sourced from the Delgado radio Times cover.

Its been known and acknowledged for years that Achilleos used the TV21 strips as reference. And no one batted an eyelid. So why the need to chastise him now?

"Its been known and acknowledged for years that Achilleos used the TV21 strips as reference. And no one batted an eyelid."

It was a new discovery to me, a fan of both the books and comics for 30 years. Judging by the huge amount of feedback I've had over the last few days (not just here but also on Facebook, Twitter and emails) the connection between the Achilleos covers and the TV Century 21 strip was hitherto unknown to many, including some very well-informed fans

"So why the need to chastise him now?"

My article points out the evidence. It does not 'chastise' Achilleos.

Can't wait for the book Paul! I posted about this influence on Chris's work a while back in my own blog (see my update here - http://confessionsofwho.blogspot.com/2011/09/target-artwork-origins.html). I've been trying to find my reference for this, but alas no luck - I'm guessing an interview with Chris in DW Monthly magazine, but have yet to find it...

Amazing and slightly shocking. The Achilleos images became iconic - nver realised how close (and that's tactful) they were to the Turner images. Shocked.

in the 80s version of 'The Eagle', there was a comic strip based on Bluebird's "Manta Force" toyline. One particular issue had the Manta Force team confronted by a huge sea-monster, which I immediately recognised as being Frank Bellamy's illustration of the Loch Ness Monster from Terror of the Zygons.

Can't remember which issue it was, but the strip only ran for 21 issues or so from sometime in 1988.

I'm surprised nobody has mentioned the fact that a young Chris Achilleos was actually employed as a stand in for Ron Turner on the TV Century 21 'Daleks' strip during January and February 1966 (issues 51 -58).

Thanks for your comment - but I'm afraid your information is incorrect. 'The Daleks' strip in issue 51 was illustrated by Ron Turner, and in 52-58 by Eric Eden. To the best of my knowledge, Chris Achilleos never worked on 'The Daleks'.

all the best
Paul

I must admit that I've always assumed the 'Phryne' storyline was 100% Eden, but I based my comment on a specific reference to "51-59's fill in from the young Chris Achilleos" that appeared in an article by Graeme Bassett and Graham Bleathman in David Roach's old fanzine 'Hellfire'. Admittedly they were pretty young when it was published but over the years I've learned to respect the opinions of all three of those gentlemen when it comes to obscure details about comic art.

There have in the past been some incorrect assumptions about the artists on The Daleks strip. Eric Eden has long since been confirmed as the artist responsible for that story.

Chris Achilleos has always said that his earliest involvement with Doctor Who was illustrating the initial three 1973 Target book covers.

Furthermore, Achilleos left Hornsley College of Art in the early 1970s so it is improbable that he would have been working on TV Century 21 in 1965/66.

I've just looked at the Dalek episodes in question and, as a long standing fan of Eric Eden's work, I have to agree that he was clearly responsible for the art from Jan 15th to Feb 26th 1966. However, this only makes it harder than ever to understand how the two Graeme's could have thought that Chris Achilleos was involved. As you say, it may well be one of those baffling pieces of misinformation that used to get repeated over and over again within comics fandom (like the old canard that Jerry Siegel created the Spider). On the other hand I can't help noticing that the storyline ran at just about the same time Chris left school for college in 1966. Given that Hornsey was relatively close to Eden's studio in Hampstead, and that the former Dan Dare colourist was in those days widely acknowledged as comics' leading expert with the airbrush, it's tempting to wonder if Chris might have developed his own enthusiasm for the technique during a brief period as Eric's assistant.

Of course that's pure speculation on my part and may well be completely unfounded. Even so, I'd love to hear what Graham Bleathman has to say about it - or, of course, Chris himself!

Achilleos spoke in detail about his early career in an interview published in Doctor Who Magazine #87 (April 1984). There's no mention of TV Century 21 or Eric Eden, but he does talk about The Eagle and Frank Bellamy having a huge influence on him. Achilleos talks about "the very first thing that I had published", which was a book he worked on by Patrick Moore about the moon in 1968 or 1969 while he was still at college.

I was at Hornsey College of Art when Chris was. We both graduated in 1969. Chris worked on an illustration for the Daily Mirror of the moon landing. He was told to use the 'stipple' style of Frank Bellamy who was then drawing the Garth strip. That same style was used for the Patrick Moore material.

Chris had kept Eagle material of Dan Dare and Heros from his childhood both by Frank Bellamy.