How I got Stripped for Action 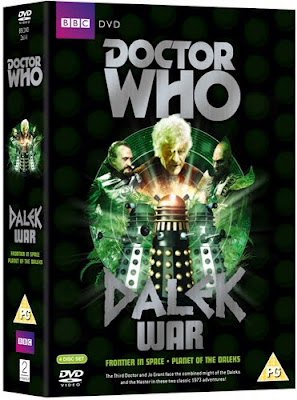 The Doctor Who: Dalek War DVD box set (recently released in the UK), contains two 1973 Jon Pertwee stories: Frontier in Space and Planet of the Daleks. The set has been eagerly anticipated by fans due to the extraordinarily successful colour restoration of episode three of the latter story which for the past three decades has only existed as a monochrome recording.

The DVD has personal significance as I crop up in the extras. I’m in two separate features, both instalments in the ongoing ‘Stripped for Action’ series which examines the history of Doctor Who in comics. It’s the second time I’ve appeared on a Doctor Who DVD. The first was on Lost in Time some years earlier where I talked about finding a lost episode in an interview that was shot in my living room.

The invitation to appear in the documentaries came about at relatively short notice while I was in the UK last year on a month-long holiday. I had emailed Marcus Hearn, the director of the ‘Stripped for Action’ series, back in April 2008 to let him know that I was writing a book about Doctor Who comic strips and suggested meeting up while I was in London to compare notes since our two projects covered the same ground.

Several weeks passed. Then, on 20 May, midway through my stay in London, I received a reply from Marcus. He had just seen my email having recently returned from a month-long overseas trip. Marcus asked if I was still in London and if so would I like to be interviewed on camera for ‘Stripped for Action’? I replied that I had two weeks left before I had to fly home and if he could arrange something in time I’d be happy to participate.

Marcus pulled out all the stops to arrange contracts and book studio time at short notice to accommodate my limited availability. We met up in a coffee house in Soho to work out what we should cover in the interview and using these notes Marcus came up with sets of questions. I received these a few days in advance of the recording so I that had time to consider my answers. Marcus had already delivered most of the instalments in the Stripped for Action series, two of which had already been released on DVD. There were just three left to complete the series and Marcus wanted to interview me for all of these in a single studio session. Two of the three were The Third Doctor and The Daleks which both appear on Dalek War. The third documentary has yet to be announced, so I won’t disclose the subject of that one. It shouldn’t be hard to guess what it is, though.

My contributions to ‘Stripped for Action’ were recorded at a studio in Wapping, London on Tuesday 3 June 2008. This was just a couple of days before I was due to fly home to New Zealand.

To make good use of the studio booking, Marcus arranged two regular commentators, Jeremy Bentham and Alan Barnes, for the same studio session. Jeremy is a highly-respected ‘elder statesman’ of Doctor Who fandom who had written some influential articles about Doctor Who comics back in the early 1980s. I met up with Jeremy in London earlier in my trip to interview him for my book, and he and his delightful wife Paula treated me to a very nice dinner at an upmarket London restaurant. It was a delight to meet him once more at the studio recording. 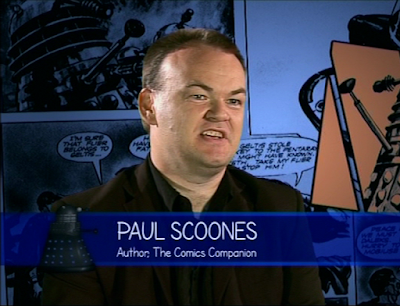 The recording session took place in a small concrete-walled studio. I sat on a chair against a green screen backdrop. In the finished documentary, the green has been keyed out and replaced with an assortment of panels from the comic strips. I was advised not to wear anything green as this would interfere with the process. The screen was illuminated by a ring of exceedingly bright green lights placed around the camera lens which I found very distracting at the edge of my vision.

Marcus sat some distance away from the camera and fed me the questions and directions. So that my comments would make sense in the documentary I had to phrase my answers as self-contained statements. For example, when I was asked to describe the style of comic artist Ron Turner, my answer needed to begin something like “Ron Turner’s illustration style was...”

Going into the recording I felt prepared and confident but once it got underway I was surprised to find the experience more of a challenge than I’d expected. I was put off by the intense lights and to my horror I started muddling my words and speaking too fast. Fortunately Marcus is a patient and understanding director, and we did a few retakes of the initial question until I had relaxed into the process. As we began recording I was directed by one of the crew to keep still and to keep my hands out of shot. When I’m speaking, like most people, I tend to move about a bit and gesticulate, so having to sit still and not use my hands felt unnatural and disconcerting. I’m still not entirely sure why I was given this direction. On the documentaries a number of my fellow commentators can be seen waving their hands around which I think in contrast makes me look stiff and uncomfortable.

Following my session I got to sit and watch as Jeremy (who had arrived during my recording) took my place in front of the camera. I could sit and listen to Jeremy talk all day; he knows his subject very well indeed and is also clearly a confident and accomplished speaker. I had kept my answers fairly brief and to the point, whereas Jeremy expounded at great length, impressively covering the answers to a whole range of questions in a single informative and detailed monologue.

Alan Barnes turned up after Jeremy and I had finished our contributions. After a short break Alan went into studio to record his segments and Jeremy and I left to catch the train home. The walk to the station gave me the opportunity to chat some more to Jeremy about my book and he was very supportive of the project and subsequently sent copies of some early articles he’d written about the comics.

I received my complementary copy of the DVD box set from 2|entertain earlier this week, so one and a half years after the recording I've finally seen the finished results for the first time. I'm never comfortable with seeing myself on screen, and this combined with recalling just how uncomfortable I'd felt during the recording itself, meant that it was with some trepidation that I watched these features. Just a handful of my responses have made it on to the documentaries - but I consider that a good thing; my limited appearance makes them slightly easier to watch, and I'm relieved that my discomfort isn't as evident on screen as I'd feared.

Alas, the credit’s not quite right (as seen in the screen shot). I’m billed as the author of The Comics Companion which should be The Comic Strip Companion. I’ve already had people who have seen the documentaries contact me to ask where and when the book’s available. The answer is that it’s not finished yet. I’m hopeful that it will be out sometime next year, and it is being published by Telos.
Posted by Paul Scoones at 11:18 am

Hi, it's a very great blog.
I could tell how much efforts you've taken on it.
Keep doing!