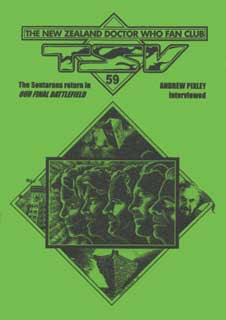 In my editorial for TSV 59, published January 2000 I took the occasion of the turning of the decade to bemoan the fact that, notwithstanding the McGann TV movie, fans had gone ten years without newly-produced television Doctor Who. I wrote of the unexpected thrill that myself and a couple of friends had experienced when we first watched the cliffhanger ending of The Curse of Fenric episode three, a thrill that had been missing in the intervening years; and concluded by making a simple yet heartfelt request: "Can we have our series back, please?"

I had to wait a few more years after that editorial appeared but I’m happy to say that my request was granted and I'm now experiencing that cliffhanger thrill again, most recently at the conclusion of The Stolen Earth, which was so astonishingly unexpected it actually had me wondering whether I just seen the Tenth Doctor's swansong. Honestly, I cannot understate this: I adore the new series of Doctor Who and it's brilliant beyond words that it has been such a phenomenally huge success.

TSV 59 however belongs to a time when fans were still clutching at whatever passed for something new about Doctor Who. It seems highly unlikely that a spoof Comic Relief sketch would receive such prominence now, but there’s The Curse of Fatal Death (scripted by current producer-in-waiting himself, Steven Moffat), on the front cover. Actually that’s a rather good piece of artwork by Alistair Hughes which cleverly pastiches Target’s The Five Doctors novelisation cover.

There’s more goodness from Al Hughes inside the issue, in the form of a Lara Croft-inspired picture of Leela. The artwork appeared in black and white in the issue, but in an early example of the TSV website supporting the issue’s content, a link was provided for readers to check out the full colour version online. (Now, of course, the whole issue's on the website.)

Al’s finest work this issue is in the form of an eight page comic strip called Our Final Battlefield which is just stunning. When I first laid eyes on this I emailed Al and told him he should send a copy to Doctor Who Magazine to see if they might be interested in printing it. I’ve no idea if Al did, or if he received a reply, but to my mind it was certainly worthy of consideration.

TSV 59 also has some rather good articles, including an insightful examination of the subtext of The Greatest Show in the Galaxy by Peter Adamson. This caused a bit of a problem when an emailed comment was included that wasn’t intended for publication. Thankfully this genuine misunderstanding was soon smoothed over without the need to do anything as drastic as withdrawing the entire print run (though this was initially requested), but I have of course removed the offending comment for the online edition.

Peter was a prolific contributor to TSV for many years, delivering both quantity and quality with inspiring regularity. His input, if not always his name, infuses at least half of this issue’s content. The Machinery of Survival is one of his articles, a thorough examination (I’m tempted to write dissection) of the rather gory subject of converting humans into Cybermen. Now that’s why I think Cybermen are far scarier than Daleks.

I mentioned in a previous commentary that legendary TV historian Andrew Pixley has something of an aversion to being interviewed, claiming that the process of writing the Doctor Who Magazine Archives was simply too boring to talk about. I disagreed, and after some gentle persuasion on my part he agreed to an email interview. The first half appeared in this issue, and I think makes fascinating reading for anyone like me who regards Andrew’s Archives as the most thorough and reliable reference work ever produced on the behind-the-scenes history of Doctor Who. I just wish that these will someday get reissued as bound book editions, as it would be a lot easier to look things up if I didn't have to shuffle through more than a decade’s worth of magazines.

Even if you're already familiar with Andrew's interview from the print edition, I recommend looking up the online version as it includes a new postscript by Andrew in which he brings his comments up to date. I should add too that Andrew offered to write this for the online edition when he observed that the issue was due for republication, without any prompting from me. That's the kind of generous and thoughtful man he is.