"There's a little black spot on the sun today..." 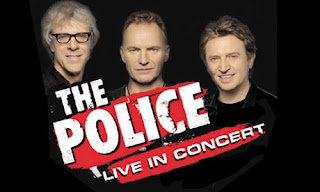 I've admired The Police since I first got into music as an impressionable teenager back in 1983. Not the best timing, perhaps, as this was the same year that The Police released their last studio album, the brilliant Synchronicity (I diligently collected their entire back catalogue, but their last album has always remained my firm favourite).

The Police played at Western Springs on 29 February 1984. I really wanted to go, but didn't have the money for a ticket. I rather jealously heard all about it from my school friends, and consoled myself with the thought that they'd tour again and I'd see them next time. The Police broke up (or perhaps, rather more accurately, failed to get back together) soon afterwards, crushing this hope.

Twenty-four years later, I finally got to see The Police play Western Springs, in the company of around 60,000 others, last Saturday, 19 January.

The addition of Fergie as a support act generated additional buzz for the concert (and no doubt helped to sell many more tickets), but I'm not a fan of the Black Eyed Peas singer, and judging by the muted reactions of most of the audience, I was far from alone in this. Perhaps most tellingly, her medley of cover versions of various rock songs got a much bigger reaction from the crowd than most of her own material.

Fergie was preceded by the first support act, Fiction Plane, who were more impressive. We arrived just as they started playing, and I noticed a big cheer went up from the crowd when the lead singer said they'd just come up from Wellington. This is likely why there are now some misinformed posts online saying that Fiction Plane are a local act from the capital city whilst marvelling at how much the lead singer sounded like Sting. That's because Fiction Plane are actually a British band and the singer is Sting's son Joe Sumner - whom in a rather wonderful example of synchronicity (!) was born in 1977, the same year The Police first got together. A touch of nepotism at play there, perhaps, but Fiction Plane's performance proved they had nothing to apologise for.

The biggest surprise when The Police finally came on was Sting's appearance. I'd seen him perform live on DVD and in the flesh once before on his Mercury Falling tour (Auckland, 10 November 1996), but he now looks very much older, slightly plumper and more haggard. His torn tight white shirt and full grey beard certainly lent much verisimilitude to the opening lyric, "Just a castaway..."

Seeing Sting, Stewart Copeland and Andy Summers play together is quite simply electrifying. Sting alone is a strong stage presence but Summers' brilliant guitar playing and Copeland's incredible drumming actually seemed to be conspiring to drown out Sting's vocals and bass guitar at times, and you can quite believe the rumours that the three men like to play together, but don't actually like each other all that much. Copeland's legendary drumming style is perhaps best described as fast and hard. In addition to a large drum kit, Copeland also had a separate array of percussion instruments, and some songs (including King of Pain and Wrapped Around Your Finger), would see him dart between his kit and these instruments. Summers delivered some awesome guitar playing, with some songs reinterpreted with extended guitar parts showcasing his talent.

Although I enjoyed the opening number - Message in a Bottle - it was the second song, the brutal, soaring rendition of Synchroncity II (a personal favourite track that juxtaposes harsh urban truths with the mythic Loch Ness monster) that completely won me over. The large screens surrounding the stage that had remained dark through the first number at this point lit up with the primary colours from the iconic Synchronicity album cover.

I was less impressed with Invisible Sun, a broodingly powerful song about conflict in Northern Ireland that was somewhat bizarrely accompanied by photos of sad-looking third world children on the screens. If the message was that now that the troubles in Ireland are mostly resolved, the song should be now directed at other humanitarian issues, then it feel rather flat in my view, and took something away from the importance of the original message inherent in the lyrics.

The set list covered material from all five albums and included some of the lesser-known tracks like Hole in my Life, Voices inside my Head and When the World is Running Down... Of the 18 songs played, five each were from Outlandos d'Amour (half of the entire album!) and Zenyattà Mondatta, whereas Synchronicity had four, and Reggatta de Blanc and Ghost in the Machine were surprisingly under-represented with just two songs each. In total The Police played an impressive third of their 54 studio album tracks.

I would have loved them to play Spirits in the Material World, Tea in the Sahara, Demolition Man and Walking in Your Footsteps - but at least we got Don't Stand So Close To Me that had apparently been absent from the Wellington set list two nights earlier. Despite Sting's banter with Andy over what song the guitarist was going to spring on them next, other than the above omission the set lists for their two New Zealand shows were otherwise identical.

The crowd went wild for Roxanne, but our distance from the stage - we were perched halfway up the hill at the back of the stadium - meant that we missed out on the full effect of the sing-along audience participation. When Sting deliberately left the occasional gap in the lyrics we had to take it on faith that those close to the stage were singing along.

I loved the encores, which included another two personal favourites, King of Pain and Every Breath You Take, and I think I'd have been satisfied if it had ended there, but Andy's lone presence on stage, impatiently waiting for his band mates to return, signalled that there was something more to come. Sure enough, we were treated to a rocking version of Next to You to close out the night.

A brilliant live act that rewarded my exceptionally long wait!

Setlist:
Message in a Bottle
Synchronicity II
Walking on the Moon
Voices Inside My Head
When the World Is Running Down...
Don't Stand So Close to Me
Driven to Tears
Hole in my Life
Every Little Thing she does is Magic
Wrapped around your Finger
De Do Do Do, De Da Da Da
Invisible Sun
Can't Stand Losing You
Roxanne
King of Pain
So Lonely
Every Breath You Take
Next to You
Posted by Paul Scoones at 2:00 pm