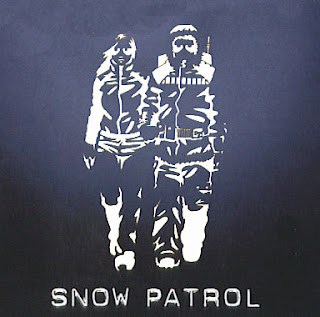 Snow Patrol. I first discovered them in 2005 after hearing the single-tinglingly beautiful Run on the end of the Doctor Who Confidential for The Parting of the Ways. I couldn't get the song out of my head so I found out the artist, bought the album (Final Straw), played it incessantly on my iPod for a few weeks. Loved it to bits. Bought Eyes Open, the new album, as soon as it was released. Loved it equally. Adored the track Chasing Cars long before Gray's Anatomy (a show I've never watched) propelled Snow Patrol into a whole new level of public awareness and appreciation. Right, that just about brings us up to date on my love affair with Snow Patrol's music.
Last night Rochelle and I - along with a few thousand others - saw Snow Patrol perform live at the Trusts Stadium in West Auckland. We've got a couple of their concerts on DVD so I had some idea what to expect, but I was blown away by the sheer energy of the performance and the infectious charisma of lead singer and all round nice guy Gary Lightbody. On How To Be Dead Gary stopped singing abruptly and the audience carried on without him. But this wasn't one of those moments when the crowd is expected to sing along - when the song ended, Gary admitted sheepishly that he was enjoying himself so much that his mind had suddently blanked on the words. And he really looked like he was having fun, bantering along with the audience, grinning uncontrollably whilst singing and bounding all over the stage.
There were a few sing-alongs - notably the final refrain of Run:

Light up, light up
As if you have a choice
Even if you cannot hear my voice
I'll be right beside you dear

...which (as usual for a Snow Patrol gig) the crowd sang unaccompanied.

We were reasonably close to the stage - there were perhaps 10-12 rows standing in front of us - including a delightfully enthusiastic guy standing in front of me, who was a mine of information about the band. It was possible to work out from the reactions of those around me who favoured Final Straw, who favoured Eyes Open and those like myself and the guy in front of me who knew and loved both equally. Both albums were well represented in the set, so no-one would have gone away disappointed.

My one gripe about the U2 concert of a few months ago was what a bad choice Kanye West was as the opening act as his musical style was a poor match for the main act. No such problem this time around though as both New Zealand support acts were well suited to Snow Patrol's alternative rock styling. The two support acts were mysteriously listed on the pre-publicity as 'Support Act 1 & 2', and until they came on we had no idea who would be playing. The first act was NZ band Tourist and the second - to raptuous applause and utter disbelief from the crowd was another NZ act, Evermore, who have recently found deserved intertional recognition. Evermore's set in particular was so extraordinary that they threatened to eclipse the main act. I've been to concerts were the support act was received at lot of 'scarcastic' applause at the end of their set simply because the audience is relieved that they're finished and the long-awaited main act will be on soon, but the thunderous cheering from the crowd at Evermore's departure was genuine and heartfelt.

A brilliant night out. My ears are still ringing.
Posted by Paul Scoones at 12:15 pm