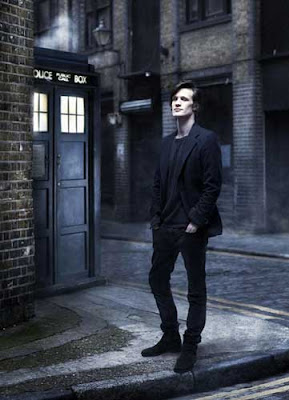 “Hello, Paul? It’s Ben from Radio Live here. I’ve just spotted the news about Doctor Who. I'm wondering if you would talk to Jemma on our show tomorrow morning about it.”

That was the phone call I received yesterday, and as a result at 6:55am this morning I was on air talking about Doctor Who. I couldn’t help thinking that, ten years on, history was repeating itself. When the news broke about the return of the missing episode in January 1999 I was hounded by the television radio and print media.

But Radio Live wasn't calling about a missing episode. The news was that the BBC had just announced the casting of the Eleventh Doctor. Even though I’d only discovered the identity of the actor myself less than an hour before that phone call, I agreed to the interview.

The casting of the Doctor had taken place in secrecy, as these things do, fuelling a media frenzy in the UK ever since 29 October 2008 when Tenth Doctor David Tennant publically announced his resignation live on television whilst accepting the National Television Award (for Outstanding Drama Performance). It’s a measure of just how massive Doctor Who is these days that speculation flooded the UK news media.

Fan discussion forums were just as busy, endlessly debating the merits of such supposed contenders as Paterson Joseph, David Morrissey, Chiwetel Ejiofor and James Nesbitt among many others. Billie Piper was even mooted as a strong contender, which seems absurd – not I hasten to add because of her gender, but because having been so strongly identified in the series as Rose Tyler, having her play the Doctor just simply would have been way too confusing.

Betting agencies soon got in on the act, with updated lists of their odds widely reported. It’s perhaps instructional to note for future casting speculation that they were well off the mark; the actor awarded the role didn’t even appear in Betfair’s top 20 picks, just hours before the announcement (which leads me to wonder if he was tempted to put a wager on himself; that could have been a nice little earner!).

The announcement was made on Doctor Who Confidential, a BBC television documentary screened in the UK on Saturday evening. I downloaded it Sunday morning while staying well clear of the rest of the internet, least I spoil it for myself. Rochelle and I then sat down and watched the special in the early afternoon, seeing for the first time Matt Smith, the man who will be the Eleventh Doctor.

At just twenty-six year old, Matt Smith is the youngest of the eleven Doctor actors, but only a few years younger than Peter Davison was when he accepted the part of the Fifth Doctor (he was 29). Apparently the producers were not particularly looking for a young man when they began the casting process, but the final decision to go with someone so youthful must surely have been guided by such factors as the ability to cope with the gruelling recording schedule (which could easily wear out an older actor); and also to appeal to the series’ huge audience of children (I’m sure Matt Smith will look more appealing on the covers of the Doctor Who Adventures magazine than, say, James Nesbitt).

I’m not familiar with any of Matt Smith's roles and didn’t recognise his face or his name (though as I’ve watched The Secret Diary of a Call Girl and part of Ruby in the Smoke – in both of which he starred opposite Billie Piper – I realise that I must have seen him before). I like the idea that the BBC has gone with a virtual unknown. I think some of the Doctors, and Peter Davison most of all, suffered from strong public association with prior roles (Davison was already well-known as veterinarian Tristan Farnon from All Creatures Great and Small).

I like the fact too that Matt Smith has very slightly unusual facial features, including a high forehead and a prominent chin. Looking a little bit odd ought to be a plus factor for the Doctor. Tom Baker for example had a rather distinctive appearance (bulging eyes, huge bushy hair, too many teeth) which all helped him to define the part as his own. In his interview he waggled his fingers very expressively while talking, which immediately struck me as very 'Doctorish', and something I'd be keen to see him carry over into his performance.

It’s likely to be a year and a half before we first get to see Matt Smith playing the Doctor on television, but I for one am looking forward to see what he does with the role in 2010.
Posted by Paul Scoones at 3:16 pm

The best-half called out this morning, "Paul's on the radio!" A wee bit unexpected, but your dulcet tones were a welcome addition to my morning routine. Yes, I'm aware that the use of dulcet is fairly... creative.

Sorry to have interrupted your morning routine!

Now you will recall how badly I coped with mornings, circa 9am, so imagine my cognitive state at five to seven. It's a wonder I made any sense at all.

It appears a number of wagers were placed on who the Doctor would be from Matt Smith's home village very shortly before it was announced... :-)