I’m seven years old, sitting on the step that connects the living room at the front of our house to the passage at the rear. Mum comes over and says that she has a book for me.

It is a Doctor Who book, with a man, a dinosaur, a terrifying-looking lizard man and an exploding volcano on the cover.

I know a bit about Doctor Who. It is a mysterious and scary television programme I’ve recently seen for the first time. Mum likes Doctor Who. She grew up watching the show. It’s okay to be scared when Doctor Who is on because she watches with me.

Mum bought the book for herself but after reading thought I might like it. I’ve never read a book this long before. There are some pictures to help explain things, but most pages just have words and the writing looks tiny.

On the back of the book Mum has neatly crossed out a single word with a black felt-tipped pen:

“… Tyrannosaurus rex, the biggest, most savage mammal which ever trod the earth!”

Whoever wrote that got it wrong, Mum tells me. Dinosaurs were not mammals.

Mum thinks I should try reading the book by myself. If Mum thinks I can do it, I must be able to.

I start reading, trying to finish a chapter a day. I take the book to school. I read it during lunchtime in the classroom on a rainy day while eating peanut butter sandwiches. The story is enthralling and terrifying in equal measure.

The bit with Morka watching Fur Under Nose, Frock Coat and Silver Buttons is odd and unfathomable. Major Barker and Masters getting sick and succumbing to a deadly virus is terrifying. I read the book through again, several times.

Soon after, I discover that my local library has other Doctor Who books. I read them all. I’m well and truly hooked.

I’m 42 years old, standing in front of a group of mourners who have gathered to remember and farewell Mum.

I speak of how Mum inspired me to set out on the journey that led to where I am now. My life-long fascination with Doctor Who has led to professional work associated with the series. I am a freelance writer, working for the BBC on production notes subtitles for the DVDs and writing a book about the comic strips.

It all started with my Mum and a book called Doctor Who and the Cave Monsters. 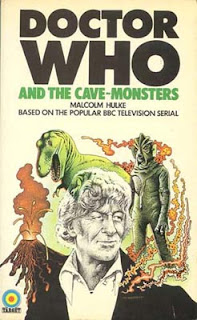 This piece was originally published in Behind the Sofa: Celebrity Memories of Doctor Who, edited by Steve Berry (Matador, 2012, reissued by Gollancz, 2013).

I wrote the article shortly after my Mum, Janet Elayne Scoones, died on 6 April 2010. I've republished it here to mark the tenth anniversary of her passing. Miss you, Mum.
Posted by Paul Scoones at 11:25 pm No comments: