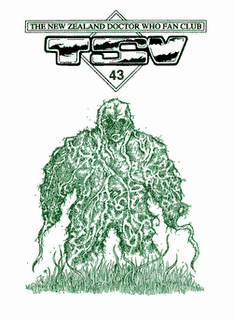 TSV 43 was the second of four issues produced in 1995, coming out in March of that year, and has just been republished online.

The lead feature was a transcript of a roundtable discussion organised by David Bishop, with Paul Cornell, Andy Lane and Steven Moffat. Oddly enough, although the average TSV reader would have instantly recognised Cornell and Lane's names as regular and popular New & Missing Adventures authors, they would probably not have been familiar with Moffat, whose biggest claim to fame at the time was creating and writing Press Gang, a UK TV series which has never screened in New Zealand, to the best of my knowledge. Nowadays, Moffat is one of the leading lights of the new series, having written the episodes The Empty Child, The Doctor Dances and The Girl in the Fireplace - all of which in my view will long be remembered as among the very best episodes the new series of Doctor Who has produced. The Four Writers, One Discussion interview is very candid and really rather funny in places.

The Seeds of Doom - An Appreciation was written by a UK reader, Guy Blythman, who contributed several pieces to TSV. This article garnered some controversy in the form of a long reply refuting some of Blythman's views in the following issue from Phillip J Gray and a subsequent response from Blythman in TSV 45. The article itself saw the beginning of TSV's long-standing policy of letting the latest video releases determine some of the issue's content (The Seeds of Doom was new out on VHS in New Zealand at the time).

The Enigma Magnet, written by Peter Adamson and drawn by Paul Potiki, marks the beginning of a run of 13 comic strip stories over the next 17 issues. Many of these strips were either written or drawn (sometimes both!) by the talented Peter Adamson.

Peter also contributed the front cover illustration of a Krynoid, which was indentended to be printed in green. The printers withdrew the spot-colour service about the time that the issue was due to be printed, which was a shame. I've recreated the cover in Photoshop to show how it was intended to appear.

The back cover was drawn by Alistair Hughes, marking his return to TSV after a absence of several years whilst he was living in Scotland. I adore this piece of artwork and immediately started encouarging him to draw more for TSV. From the following issue he would become the 'resident' front cover artist, providing the covers for all but two issues from TSV 44 through to TSV 69.

My own major contribution to this issue was an article about the making of the 30 Years in the TARDIS documentary and its subsequent extended video release. I heard secondhand from one of the UK readers a while later that a copy of my article had found its way into Kevin Davies' hands and he apparently was very impressed with what I'd written. Coming from the documentary's producer/director that was high praise, and that really made my day, as you can imagine! But the story doesn't end there - a couple of years ago, I got an email from Jeremy Bentham, publisher of the highly-respected InVision magazine. Jeremy had also seen my article and wanted my permission to reprint it in the final issue of InVision. I of course said yes. There's few greater compliments in my view than having your work sought out like this.