The Caves of Androzani is the sixth story of Season 21. It is four episodes long and was first broadcast in the UK from 8 March to 16 March 1984. The story is written by Robert Holmes and directed by Graeme Harper. It stars Peter Davison (the Doctor), Nicola Bryant (Peri) and Colin Baker (the Doctor). The guest cast includes Christopher Gable (Sharaz Jek), John Normington (Morgus), Robert Glenister (Salateen), Maurice Roeves (Stotz) and Martin Cochrane (Chellak).

The story was originally released on DVD in 2001, as one of the earliest titles in the range. The story was later given a 'Special Edition' reissue featuring improved picture quality and an expanded set of features.

I was commissioned to write an entirely new replacement set of production information text for the special edition, in December 2008, two years ahead of the due date. Scans of the production files were made and sent to me in New Zealand. I also received early versions of the scripts that contained many sequences that were either significantly altered or cut altogether in the final televised episodes. I began my research in May 2009. The finished subtitle scripts were completed and delivered in February 2010.

The DVD was released in October 2010, in the Revisitations 1 boxed set, packaged with 'Special Edition' reissues of The Talons of Weng-Chiang and Doctor Who The Movie. 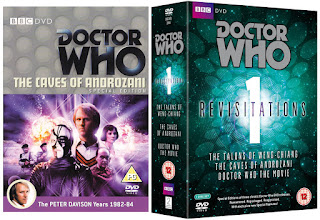 Follow the links below to see more about other stories I worked on (listed in order of DVD release).
Planet of Fire
Resurrection of the Daleks
Frontios
The Awakening
Dragonfire
Vengeance on Varos
Scream of the Shalka