The Awakening is the second story of Season 21. It is two episodes long and was first broadcast in the UK from 19 January to 20 January 1984. The story is written by Eric Pringle and directed by Michael Owen Morris. It stars Peter Davison (the Doctor), Janet Fielding (Tegan) and Mark Strickson (Turlough). The guest cast includes Polly James (Jane Hampden), Denis Lill (Sir George), Glyn Houston (Colonel Wolsey) and Keith Jayne (Will Chandler).


This story represented the beginning and the end in terms of my work on Peter Davison’s era. The Awakening was the earliest in a run of his final five stories that I worked on (amounting to the last quarter of his entire era), but also the last one I completed of these five. As The Awakening is only two episodes long rather than the usual four this should in theory have taken half as much time and effort, but in practice the research phase at least was every bit as intensive. I was commissioned in July 2010 while I was working on Frontios. The deadline was tighter than usual so I had to start work on the story straight after I’d finished writing the scripts for Resurrection of the Daleks, in November 2010 (which in turn had been written hard on the heels of Frontios). I completed the scripts for The Awakening in January 2011.


The Awakening was released on DVD in June 2011. It was issued in the Earth Story boxed set, packaged with The Gunfighters. 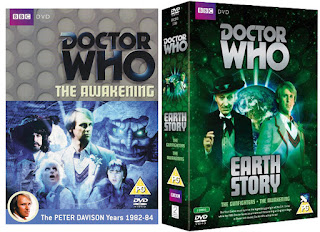 Follow the links below to see more about other stories I worked on (listed in order of DVD release).
Planet of Fire
The Caves of Androzani
Resurrection of the Daleks
Frontios
Dragonfire
Vengeance on Varos
Scream of the Shalka