Scream of the Shalka is an animated story. It is six episodes long and was first released online from 13 November to 18 December 2003. The story is written by Paul Cornell and directed by Wilson Milam. The cast includes Richard E. Grant (the Doctor), Sophie Okonedo (Alison), Derek Jacobi (the Master), Craig Kelly (Joe), Jim Norton (Kennet), Conor Moloney (Greaves) and Diana Quick (Prime).

I was commissioned for this, my final contribution to the DVD range, in October 2012. At the time it was believed that the BBC Written Archives Centre did not hold any production files for this story, so I was faced with the challenge of writing about the production with minimal documentation. I was fortunate that the story’s writer, Paul Cornell, had not only retained numerous script drafts but was willing to let me have these with me along with other notes he had saved from a decade earlier. Former BBC online producer James Goss also provided invaluable material and insights. I began work on the production information text soon after I was assigned the story and completed the work in April 2013, five years after I received my first commission for the range.


Scream of the Shalka was released on DVD in September 2013. 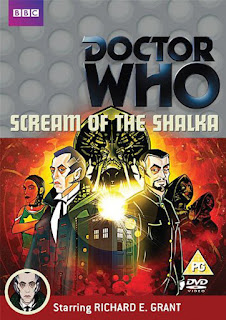 Follow the links below to see more about other stories I worked on (listed in order of DVD release).
Planet of Fire
The Caves of Androzani
Resurrection of the Daleks
Frontios
The Awakening
Dragonfire
Vengeance on Varos