Resurrection of the Daleks

Resurrection of the Daleks is the fourth story of Season 21. It is two (double-length) episodes long and was first broadcast in the UK from 8 February to 15 February 1984. The story is written by Eric Saward and directed by Matthew Robinson. It stars Peter Davison (the Doctor), Janet Fielding (Tegan) and Mark Strickson (Turlough). The guest cast includes Rodney Bewes (Stien), Rula Lenska (Styles), Del Henney (Colonel Archer), Maurice Colbourne (Lytton) and Terry Molloy (Davros).

The story was first released on DVD in 2002, one of the early titles in the range. The story was later reissued as a special edition featuring improved picture quality and an expanded set of features.

I was commissioned to write an entirely new replacement set of production information text in December 2008. Both the two- and four-part version were included on the Special Edition DVD, but I was directed to write info text for the four-part version as this was intended to be the ‘default’ edit with the two-parter as an extra feature on the bonus disc. This was however then swapped around so that the two-parter, which lacks info text, appears on the main disc, with the subtitled four-part version relegated to disc 2. Another late change of plans resulted in the deadline being brought forward requiring me to deliver the scripts much sooner than I had anticipated. I completed the work in just a few weeks between September and November 2010.

Resurrection of the Daleks was released on DVD in March 2011. It was issued in the Revisitations 2 boxed set, packaged with 'special edition' reissues of The Seeds of Death and Carnival of Monsters. 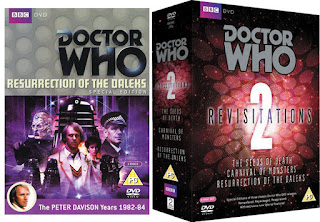 Follow the links below to see more about other stories I worked on (listed in order of DVD release).
Planet of Fire
The Caves of Androzani
Frontios
The Awakening
Dragonfire
Vengeance on VarosScream of the Shalka