I was approached to write the production information text in March 2008. This was my first commission for the DVD range. A couple of months later while, on holiday in the UK (I live in New Zealand), I visited the BBC’s Written Archives Centre at Caversham in Reading and spent the best part of a day reading through the production documentation. Returning to New Zealand in June I began work on assembling my research notes into a set of subtitle scripts, and delivered the finished work in October 2008.

The DVD of Planet of Fire was supposed to have come out around mid-2009, but was delayed by an entire year and was finally released in June 2010. It was issued in the Kamelion Tales boxed set, packaged with The King’s Demons. 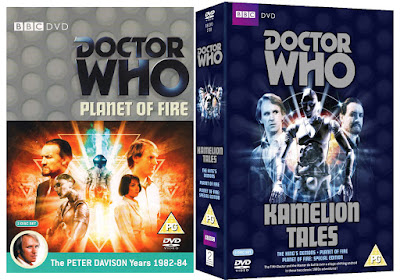 Follow the links below to see more about other stories I worked on (listed in order of DVD release).
The Caves of Androzani
Resurrection of the Daleks
Frontios
The Awakening
Dragonfire
Vengeance on Varos
Scream of the Shalka