Frontios is the third story of Season 21. It is four episodes long and was first broadcast in the UK from 26 January to 3 February 1984. The story is written by Christopher H. Bidmead and directed by Ron Jones. It stars Peter Davison (the Doctor), Janet Fielding (Tegan) and Mark Strickson (Turlough). The guest cast includes Peter Gilmore (Brazen), Lesley Dunlop (Norna), William Lucas (Range) and Jeff Rawle (Plantagenet).


I was asked to write the production information text for Frontios in April 2008 even before I had started work on my first commission, for Planet of Fire. A month later, while visiting the UK, I visited the BBC’s Written Archives Centre at Caversham and spent a day reading through the production documentation. Returning to New Zealand I filed the notes for Frontios away for a couple of years as the deadline was a long way off. I began work on the subtitles in June 2010 (coincidentally the same month that the DVD of my first story, Planet of Fire, was released). I completed the scripts in late September. Straight after finishing these I set to work on the info text for Resurrection of the Daleks, which appropriately enough was the series' consecutive story.

The DVD of Frontios was released in May 2011. 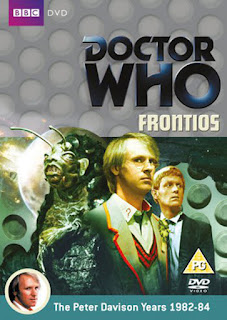 Follow the links below to see more about other stories I worked on (listed in order of DVD release).
Planet of Fire
The Caves of Androzani
Resurrection of the Daleks
The Awakening
Dragonfire
Vengeance on Varos
Scream of the Shalka