Dragonfire is the fourth story of Season 24. It is three episodes long and was first broadcast in the UK from 23 November to 7 December 1987. The story is written by Ian Briggs and directed by Chris Clough. It stars Sylvester McCoy (the Doctor), Bonnie Langford (Mel) and Sophie Aldred (Ace). The guest cast includes Tony Selby (Glitz), Edward Peel (Kane), Patricia Quinn (Belazs) and Tony Osoba (Kracauer).

When I was offered this story it was a choice between this one or another Sylvester McCoy serial, The Greatest Show in the Galaxy. I opted for Dragonfire because I felt it had more potential in terms of the various script drafts and cast changes. I was commissioned in January 2011 just before finishing work on The Awakening. I wrote the scripts between May and August 2011.

Dragonfire was released on DVD in May 2012. It was issued in the Ace Adventures boxed set, packaged with The Happiness Patrol. 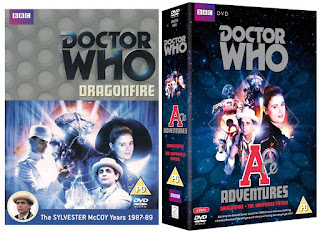 Follow the links below to see more about other stories I worked on (listed in order of DVD release).
Planet of Fire
The Caves of Androzani
Resurrection of the Daleks
Frontios
The Awakening
Vengeance on Varos
Scream of the Shalka